JAKARTA (THE JAKARTA POST/ASIA NEWS NETWORK) - Indonesia is set to propose 28 projects worth US$91.1 billion (S$123 billion) to Chinese investors on Wednesday (March 20) as part of its participation in China's Belt and Road Initiative (BRI), a senior minister has said.

Coordinating Maritime Affairs Minister Luhut Pandjaitan said the government would offer those projects, which include seaports and industrial estates, power plants, smelters and tourism estates, during the first steering committee meeting in Bali on Wednesday and Thursday.

"Out of those 28, we expect to reach a deal on at least two to three projects," he told the press on Tuesday after the Standard Chartered CEO Connect Forum on the BRI co-organised by the Centre for Strategic and International Studies (CSIS) and business intelligence institution Tenggara Strategics.

Mr Luhut, however, declined to specify the projects, as the Indonesian committee was still in discussion before choosing the ones deemed to have the most potential.

Those projects would take place in four locations designated as the Regional Comprehensive Economic Corridor.

The four locations, he said, were chosen, as they all sit on the periphery of the archipelago, coinciding with President Joko "Jokowi" Widodo's ambition to develop the country from the outer areas.

Moreover, Mr Lembong added, those locations also had their own advantages that could attract Chinese investors to the area.

North Sumatra, for example, was deemed a strategic location due to its proximity to the Strait of Malacca and as the hub of the Indonesian palm oil industry, he said.

North Kalimantan had proven to present huge potential for hydropower generation from its rivers, which would be perfect for aluminium smelters, he added.

"This makes North Kalimantan an ideal location for Chinese smelters to relocate to," he said.

The investment chief also said the government considered that North Sulawesi, being closer to China than any other location in Indonesia, made it perfect for Chinese investors.

Other than the 28 projects, Mr Luhut said, Indonesian and Chinese businesses were also conducting feasibility studies for seven other projects worth US$8.7 million in the corridor and in Central Java. Once the studies were finished, the businesses would determine the next steps for the projects.

But before businesses could reach a deal to move forward with the projects, he emphasised that Chinese investors must abide by the government's four conditions.

He said the first was that Chinese investors must only use environmentally friendly technologies for those projects as part of its commitment to maintaining the sustainability of all development projects in Indonesia. 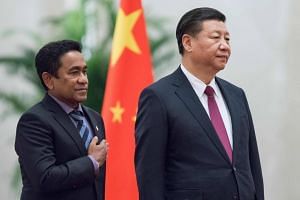 "We will not accept any second-class technology that will have a negative impact on the environment," he said.

Second, he continued, was to maximise the use of local labour in the projects. Should Chinese investors use their own labour, it would be allowed only in the initial stage of the project before they could transfer their skills to local workers.

The third condition coincided with the previous one, as the government required Chinese investors to transfer their knowledge of the technologies to their local partners through training programmes, he said.

The fourth, he said, was that the projects must create added value for the Indonesian upstream and downstream industries to reduce the country's dependence on extractive industries such as mining, as well as benefit the country's economy in the long term.

Other than benefiting Indonesia's economy, CSIS senior fellow and former trade minister Mari Elka Pangestu said the initiative could also benefit China, as it could be its source of growth amid its slowing economy and trade tension with the United States.

"In fact, the trade war could present an opportunity for us, as Indonesia could become a destination for Chinese companies to relocate their businesses to," she said.

The BRI was unveiled in September 2013 by Chinese President Xi Jinping, who had a grand vision to reawaken and extend the old Silk Road in the name of enhanced international trade, development and cooperation.

The initiative involves infrastructure development and investments in at least 152 countries.