KUALA LUMPUR - Indonesia has quietly entered into an agreement with Malaysia to hand over the luxury yacht Equanimity, allegedly purchased with funds embezzled from scandal-plagued 1Malaysia Development Berhad (1MDB), in a handover ceremony in Batam island scheduled for Monday (Aug 7).

The proposed handover comes on the heels of the seizure of the US$260 million (S$355.3 million) Cayman Island-registered vessel by a 13-member Indonesian police team and three Malaysian officials last Thursday (Aug 2) in the resort island of Bali, government officials and financial executives close to the situation told The Sunday Times.

The vessel is scheduled to arrive in Batam on Sunday (Aug 6).

A senior Malaysian government official, who insisted on anonymity, confirmed both governments had agreed to the handing over of the luxury vessel, which won awards at the prestigious Monaco Yacht Show.

But the official declined comment when pressed whether the proposed handover would be in conflict with an earlier claim over the asset by the US Department of Justice (DOJ). Since mid-2016, the DOJ has filed civil lawsuits to seize almost US$2 billion in assets allegedly bought with money stolen from 1MDB, including mansions, a Bombardier jet and royalties from the film The Wolf Of Wall Street.

Equanimity is the largest single asset in the DOJ list and is allegedly owned by financier Jho Low, whom the DOJ and Prime Minister Mahathir Mohamad's government insist was highly instrumental in the money- laundering scam at 1MDB that was allegedly sanctioned by the previous administration led by deposed premier Najib Razak.

The vessel was seized in late February in Bali by the Indonesian police on behalf of US regulatory authorities, prompting its official owner, Equanimity Cayman Ltd, to challenge the seizure. 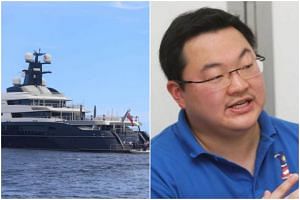 A Jakarta high court ruled in April that the widely publicised seizure of the 92-metre yacht by the Indonesian police was illegal and without merit.

The DOJ contested the claim in a Los Angeles court and secured an order that Equanimity Cayman would have to hand control of yacht to the US agency pending the sale of the contested asset. All monies from the sale would be then deposited in an escrow account until the outcome of all civil cases in the US.

A spokesman for Mr Low's legal team told The Sunday Times that the seizure was a "violation of the Indonesian law and court".

The spokesman added that the actions by Tun Dr Mahathir's administration also go against "recent US court orders" and argued that the DOJ has insisted the agency should have possession of Equanimity to ensure that the "asset retains its value until a fair court hearing can determine final ownership and the rights of all parties involved".

According to financial executives and senior government officials in Malaysia, Dr Mahathir made the request for the handing over of Equanimity in talks with Indonesian President Joko Widodo when he was in Jakarta for an official visit late last month. That led to the seizure of the vessel on Thursday.

At the time of the seizure, Equanimity was already under the control of the DOJ, which had earlier replaced the crew employed by its official Cayman-registered owner with a specially appointed team from international yacht management company Wilson Yacht Management (WYM), according to financial executives close to the situation.

WYM's office in the US did not respond to requests for comment.

Financial executives close to the situation said that the company has been engaged by the DOJ to handle the running costs of the yacht, which are estimated to be roughly US$1.15 million a month.