JAKARTA - Indonesia may be made to choose between being humane and protecting its security as it considers whether to take back more than 100 of its citizens believed to be family members of Indonesians who joined the militant group Islamic State in Iraq and Syria (ISIS).

These Indonesians have been stranded in a refugee camp in Syria since the failed caliphate was ousted by US-led coalition forces in March.

Indonesia's counter-terrorism agency (BNPT) chief, Inspector General Suhardi Alius, said on Monday night (July 8) that Indonesia is open to letting them all return, but was quick to set a condition: each must first be thoroughly investigated in Syria, as they have reportedly burnt their Indonesian passports and all forms of identification.

The government has set up a task force at the political, legal and security affairs coordinating ministry that will decide Indonesia's stance on this, but no timeframe has been set on when a decision would be taken.

"I will propose in the task force's meeting that we go and do our assessment there, so we know the clusters of networks (they were supported by)... how radical they are," Insp General Suhardi said at a discussion organised by Indonesia's Tempo magazine.

His remarks in Monday night's discussion came amid heated debate among Indonesians over whether to receive these Indonesians back home following reports that the group of mostly women and children were at the Al-Hol refugee camp in north-eastern Syria, where they went after ISIS lost Baghouz, its last stronghold in the country.

Syrian authorities are prosecuting the men who were allegedly involved in battles as combatants, Insp General Suhardi said.

"If we do decide to accept them back home, we must measure the risks. Remember, it's not only about bringing people home, but also about how we can neutralise their radical thinking and what the treatment would be," he said.

Insp General Suhardi admitted that in Indonesia's experience with terrorism, women could be as radical and motivated as men, citing as example a police raid in March in Sibolga, North Sumatra, on a house known to be housing an extremist couple. The man surrendered, while the woman steadfastly resisted police orders before she blew herself up inside the house. 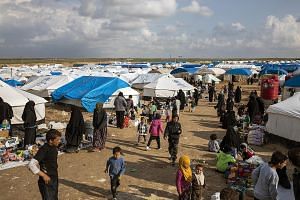 Another example,said Insp General Suhardi, was that of former Indonesian civil servant Dwi Djoko Wiwoho, who was a director in the Batam free trade zone authority office. The 51-year-old left for Syria in 2016 to join ISIS, because his teenage daughter and wife insisted on going. They went with an extended family of 18 people, but managed to return after two years as they could not cope with the rough living conditions in Raqqa.

"A young child in this family told me: I was a top grader in school before we went to Syria. Now, I want to be a top student again," Insp General Suhardi said. Several of the 18-member extended family are now active as de-radicalisation speakers sharing their gloomy experience being on the other side.

Another speaker at the discussion, Dr Sri Yunanto, an expert adviser to the political, legal and security coordinating minister, said the anticipated security concerns of neighbouring countries would be among the factors Indonesia will consider before deciding.

"When we talk about human rights, bear in mind that the parties being evaluated should not only be the authorities. Being a terrorist in fact is a greater breach of human rights," Dr Sri told the audience.

Insp General Suhardi also vented his frustration over ignorance of existing laws, which allow the Indonesian government to revoke the citizenship of individuals involved in a war to support a foreign force.

"Some seemed to forget this, and instead opted to debate publicly whether the government could strip (the refugees) of their citizenship, while others have made a fuss about the possibility of the government accepting their children," Insp General Suhardi said.

Noted de-radicalisation expert Noor Huda Ismail, who was also at the discussion: "People were not born terrorists. They went through a long process. Some of them in fact want to 'retire' from being terrorists, but in most cases their communities are not ready to accept them."