JAKARTA (REUTERS) - Indonesia intends to challenge an EU directive on renewable energy at the World Trade Organisation (WTO), arguing the plan to curb the use of crops that cause deforestation will unfairly target palm oil, a senior Indonesian official told Reuters.

The world's top producer of the oil is also reviewing its relations with the European Union over the issue and urging other South-east Asian nations to defer plans to upgrade EU ties, said Mr Mahendra Siregar, special staff at the foreign ministry.

The EU directive, known as RED II, aims to stop the use of crops that cause deforestation in transportation fuel by 2030.

Environmentalists blame a rapid expansion of Indonesian palm plantations for a massive clearance of forests that were home to endangered tigers, orang utans and elephants.

A challenge from Indonesia on the policy would escalate its efforts to safeguard sales to its second-biggest palm oil market. The EU accounted for around 15 per cent of Indonesia's total palm exports of more than US$15 billion (S$20.18 billion) last year.

Mr Siregar said palm oil will be labelled a "high-risk" crop - indicating its potential to result in deforestation - in an act attached to RED II due to be issued in early February.

Indonesia will challenge both RED II and the act at the WTO's dispute settlement body after it is issued, he said.

The WTO body can order members to remove any trade barriers if it finds that the policies breach free trade rules.

A government document outlining Indonesia's stance on the EU policy and reviewed by Reuters said the method used to assess "Indirect Land Use Change" (ILUC), which aims to measure the risk of unintended carbon emissions, was not internationally recognised and not applicable in a tropical region.

"The criteria listed in ILUC gives advantages to local European Union commodities such as rapeseed oil," it said.

Indonesia's Foreign Minister Retno Marsudi said in a letter to Asean that developments in the EU hurting the interests of Asean palm oil-producing states have caused it to defer "elevation of Asean-EU dialogue relations to a strategic level".

The Jan 14 letter, also reviewed by Reuters, urged other members of Asean to follow suit. 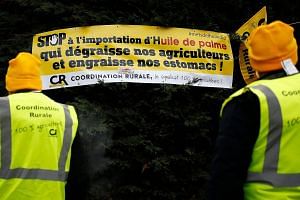 EU's palm oil curb may hurt campaign to save forests

"All Indonesia-EU relationships will be overviewed related to that discriminative policy by the EU," Mr Siregar said.

Asked about the letter, a spokesman at the Asean Secretariat in Jakarta said: "It is up to the member states to decide."

Mr Rafael de Bustamante Tello, first counsellor at the EU embassy in Jakarta, said: "The EU considers the RED II to be in line with the EU's international commitments, including its WTO obligations."

The European Commission will make sure "achievement of the EU's renewable energy goals goes hand in hand with the fair and rules-based international trade regime that we so strongly defend", he said.

In January last year, the WTO ruled in favour of Indonesia on several challenges to anti-dumping duties that the EU had imposed on its biodiesel exports. The duties had effectively stopped the trade, but exporters were able to resume shipments to Europe around April.

Palm oil, mainly produced in Indonesia and Malaysia, is used as feedstock for biofuels as well as being used in a wide variety of goods, ranging from food to soap.