JAKARTA (REUTERS) - Indonesian President Joko Widodo on Thursday (Sept 19) said his sports minister had resigned after being named a bribery suspect by the country's anti-corruption agency.

It was the second Cabinet minister engulfed in the graft case, which has been a blow to Mr Joko, Indonesia's first president to come from outside the political or military establishment. He came to power in 2014 with the promise of clean, effective government.

The Corruption Eradication Commission, known by its Indonesian initials KPK, named the minister Imam Nahrawi and his assistant as suspects on Wednesday.

"We will decide on whether we will replace him or have an interim minister, but I was delivered the letter of resignation," Mr Joko told reporters.

Nahrawi is accused of taking 26.5 billion rupiah (S$2.59 million) in bribes related to a request to the ministry for a grant proposal by KONI in its 2018 budget, said Mr Alexander Marwata, deputy chief of the KPK.

Representatives of the committee are accused of giving some of the money to Nahrawi through his assistant on five occasions.

The representatives, along with three staffers from both the ministry and the committee, had already been named suspects. 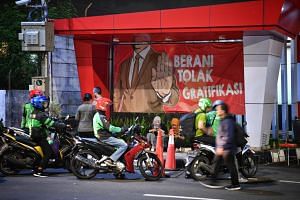 Nahrawi in a TV appearance on Wednesday night urged people to "uphold the presumption of innocence" and promised to cooperate with the KPK for the investigation.

"I hope this is not something that has a political motive and is outside of the legal system," he said.

The case surfaced after the KPK launched a sting in December 2018, confiscating 7.4 billion rupiah.

Mr Joko's former social minister, Idrus Marham, was sentenced to three years in jail in April by the special corruption court for bribery.

The case also comes as anti-corruption activists express alarm about changes approved this week by Parliament and endorsed by the President that they fear will strip the KPK of its effectiveness.

The revisions include giving an external board oversight, such as the power to authorise whether the KPK can carry out wiretaps.

The KPK has prosecuted hundreds of politicians, officials, and businessmen since its formation in 2002, becoming one of the country's most respected agencies.