JAKARTA - Amid rising external pressures, Indonesia's economy is expected to expand by 5.3 per cent next year on the back of stronger domestic consumption, investment and export, President Joko Widodo told Parliament on Thursday (Aug 16).

The growth will be oriented towards equality by accelerating development in eastern Indonesia, border areas and less-developed regions, strengthening economy in villages and intensifying efforts to address poverty, he said in his remarks to endorse the proposed 2019 state budget.

To support the growth target, the government has earmarked 2.44 quadrillion rupiah ($S229.53 billion) for the state budget next year, up 10 per cent from the figure estimated for this year.

"The quality of the state spending will be improved and focused on stimulating the economy and creating people's prosperity in a just and equal manner," Mr Joko said.

The administration will also keep inflation between 2.5 and 4.5 per cent, enabling the population to meet its basic needs, especially by ensuring affordable food prices, he added.

In addition, it expects to maintain people's purchasing power through various social security programmes, especially for the poor and low-income population.

South-east Asia's top economy expanded by 5.07 per cent last year and the government anticipates that it grew by only 5.18 per cent this year, down from the 5.4 per cent outlined earlier.

Weak household consumption and the global commodity slump has put a brake on Mr Joko's ambition of achieving 7 per cent economic growth - a figure set when he came into office in late 2014. In his first year of tenure, the emerging economy expanded by merely 4.8 per cent, its slowest pace in six years.

But, growth picked up pace to a five-year high of 5.27 per cent in the second quarter of this year, bringing the overall growth in the first half of this year to 5.17 per cent. Inflation, a key macroeconomic indicator, bodes well with the central bank's target range of between 2.5 per cent and 4.5 per cent. 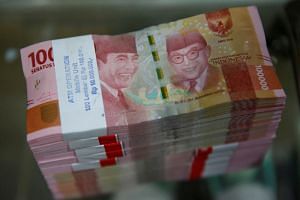 Mr Joko, who is seeking re-election in next year's presidential polls, also claimed some achievements that have been triggered by a robust economic growth at around 5 per cent during his nearly four-year tenure.

They include the fall of the poverty rate in the world's fourth-most populous nation of more than 260 million people to a historic low of 9.82 per cent in March, covering 25.95 million of its population. Furthermore, the Gini coefficient, which measures inequality, slid to 0.389 in March, the lowest in six years.

Mr Joko's massive infrastructure push and efforts to enhance the ease on doing business have also helped boost investors' confidence in the country, which still depends heavily in commodities, such as palm oil and coal, to secure foreign earnings.

The government is set to spend 420.5 trillion rupiah out of the 2019 state budget to continue the construction of infrastructure, which will include roads spanning 667km, toll roads stretching 905km and 48 dams.

However, other major challenges, particularly further rupiah depreciation and widening current account deficit, linger in the wake of a recent market rout in Turkey, triggered by its escalating trade spat with the United States.

In response to the latest development, Bank Indonesia pushed up its benchmark interest rate by 25 basis points to 5.5 per cent on Wednesday to contain the deficit and maintain confidence in the financial markets.

Mr Joko said that addressing current external challenges, such as attempts to safeguard monetary stability in the US and Europe and ongoing developments in China, the government expects the local currency to stay around 14,400 rupiah per US dollar.

The rupiah settled at 14,593 per US dollar at the close of Thursday's trading, according to Bloomberg.

Dr Piter Abdullah Redjalam, the research director at Centre of Reform on Economics Indonesia, told The Straits Times that the government puts a realistic growth target, along with moderate macroeconomic assumptions, in the proposed 2019 state budget.

"It has taken modest goals after considering domestic and external factors," he said. "In 2019, there will be high uncertainties because of a US-led trade war and ongoing developments in Turkey that may escalate into a crisis and bring contagion to other regions, primarily the Middle East and Europe."