JAKARTA (AFP) - Indonesia is expected to release the only female member of the "Bali Nine" heroin-trafficking gang from prison on Wednesday (Nov 21) after serving 13 years in a case that caused a diplomatic furore.

Australian Renae Lawrence, 41, was arrested in 2005 when authorities caught her with 2.6 kilograms (5.7 pounds) of heroin strapped to her body as she tried to fly out of the international airport on the holiday island of Bali.

She was initially handed a life term, but her sentence was later reduced to 20 years and then further cut due to good behaviour.

It was not immediately clear what time she would be released from Bali’s Bangli prison, but officials said she may be freed around midday (0400 GMT).

“Renae Lawrence is in a healthy condition. She seems to be happy, but also a bit nervous,” head of Bangli prison Made Suwendra told AFP.

It is likely that Lawrence will be deported shortly after her release. She will be the only member of the Bali Nine to win their freedom so far.

Some Australian media have reported that Lawrence could face arrest once she arrives back in Sydney over a high-speed chase involving a stolen vehicle dating back to just before she was arrested in Indonesia.

Australia's New South West Police Commissioner Mick Fuller said the police will speak to Lawrence on her return to Australia. 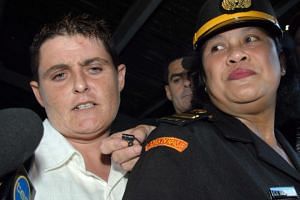 First of 'Bali Nine' drug mules to return to Australia

"I can confirm there's two outstanding arrest warrants for her and from our perspective we will make a time reasonable with her legal team to bring her in to have those warrants satisfied," Mick Fuller said.

Bali Nine ringleaders Myuran Sukumaran and Andrew Chan were executed by firing squad in 2015, sparking a diplomatic row between Australia and Indonesia, which has some of the world's strictest drug laws including the death penalty.

In June, another Bali Nine member Tan Duc Thanh Nguyen died in prison from stomach cancer, while the remaining five are currently serving life sentences and could die in jail unless they win a sentencing review.

Some critics have lashed out at the Australian police for tipping off their Indonesian counterparts about the gang and putting its members at risk of execution in Indonesia.

High-profile cases like that of Australian Schapelle Corby, who spent more than nine years behind bars for smuggling marijuana into Bali, have stoked concern that Indonesia is becoming a destination for trafficked drugs.

Corby was deported in 2017 after several years of parole.