JAKARTA (REUTERS) - Indonesia said on Wednesday (May 2) it is seeking ways to accelerate a US$5 billion (S$6.68 billion) high-speed rail project - being built by a consortium of local and Chinese state firms - which is facing obstacles from land ownership issues.

Chinese Premier Li Keqiang is due to meet President Joko Widodo next Monday during a trip to Jakarta to mark the 15th anniversary of China's partnership with Asean.

The Jakarta-Bandung high-speed rail line, the first for the country, is a flagship project of Mr Joko and was awarded to China in 2015 after a contentious race with Japan.

State-owned Enterprises Minister Rini Soemarno visited the project site on Wednesday with China Railway Corporation (CRC) general manager Lu Dongfu to monitor progress and "to find ways to accelerate" it, according to a ministry statement.

About 2,700 sq m of ground has been compacted for the first tunnel of the 150km line, the ministry said.

But ownership rights for nearly 40 per cent of land has yet to be resolved, it said.

CRC has promised the project will be completed within three years of land clearance being completed, although it was not clear when that would happen, Mr Ridwan Jamaluddin, deputy coordinating minister of maritime affairs, said after meeting Mr Lu and China's ambassador to Indonesia, Mr Xiao Qian. 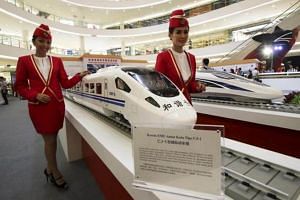 "Some critical points have been cleared, like for some tunnels and the main stations," Mr Ridwan said.

The government had previously said construction had kicked off in January 2016 and was supposed to be completed by 2019.

But Coordinating Maritime Minister Luhut Pandjaitan was quoted by the media earlier this year as saying that it may take until 2024 before the railway could be in use.

The consortium building the project, which includes China's CRC and Indonesia's Wijaya Karya and Jasa Marga, signed a US$4.5 billion loan agreement with China Development Bank in May last year.