JAKARTA (BLOOMBERG) - Indonesia's election commission ordered an investigation into reports that thousands of ballots have been cast by the diaspora in Malaysia days before overseas polling opened, prompting opposition calls for heightened vigilance in next week's vote.

The commission is also collecting information about the alleged discovery of several bags of votes already cast in favour of incumbent president Joko Widodo and some legislative candidates in Selangor, Malaysia, Kompas.com reported.

The reports of election fraud come amid allegations of irregularities in the voter list made by Mr Joko's challenger Mr Prabowo Subianto, who has threatened a legal challenge in the event of a defeat in next Wednesday's poll.

The campaign team of Mr Prabowo asked Mr Joko to "be professional and neutral in ensuring a fair election with integrity". 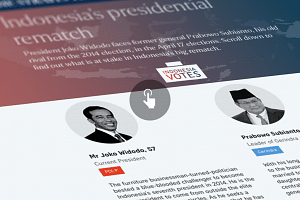 The opposition also demanded the recall of Indonesia's ambassador to Malaysia for the embarrassment caused by the suspected fraud.

Mr Joko, known as Jokowi, called for the verification of the allegations and urged people to report cases to the Election Supervisory Board before jumping to conclusions, CNN Indonesia said on its website.

More than two million Indonesians living overseas are allowed to cast their votes at foreign missions between Monday and Sunday (April 8 and 14), according to the commission. Malaysia has an estimated 1.2 million Indonesians eligible to vote in the first simultaneous presidential and legislative elections on April 14.

Most mainstream polls show Mr Joko leading by a significant though narrowing margin, while Mr Prabowo's campaign team has claimed its survey point to a 24-point lead for the former general, who lost to the incumbent in the bitterly contested 2014 elections.