JAKARTA (REUTERS) - Indonesia's president on Thursday (Feb 22) said water from the Citarum River should be made drinkable within seven years under a new cleanup project for the Java island river often ranked among the world's most polluted.

Running 300km from a spring in West Java to the sea near capital city Jakarta, the Citarum feeds three hydro power stations and is used for 400,000 hectares of rice paddies.

The Citarum Basin supports 28 million people, although the river is choked with household waste and polluted with dangerous levels of dyes and heavy metals pumped by factories into its tributaries.

"The Citarum River, which was once clear is now the most polluted," President Joko Widodo tweeted after visiting the source of the river in West Java on Thursday.

"We are trying to clean it as quickly as possible and hopefully in seven years' time it can be a source of drinking water," he said.

The government also plans to replicate the Citarum project in other basins that need cleaning, said Widodo.

The Asian Development Bank (ADB) approved a US$500 million (S$662 million) loan to Indonesia in 2009 and initiated a 15-year plan for the cleanup.

Eric Quincieu, a water specialist at ADB, said the bank had financed US$41.9 million of that amount so far, spent on developing an "integrated water resources management roadmap"for the Citarum, among other items.

"There have been challenges in mobilising support from local governments to implement (the roadmap)," Quincieu said in an email, adding the plan needed coordination between national and local governments, civil groups and the private sector. 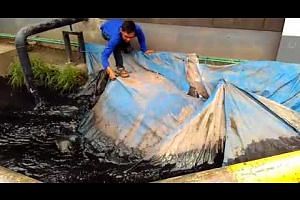 Military sent in to clean up Indonesia's Citarum River

Tubagus Haeru, an official at the Coordinating Maritime Affairs Ministry, which is overseeing the cleanup project, said previous attempts to clean the river had been expensive and had not worked.

Research carried out by the Blacksmith Institute in 2013 found levels of lead in the Citarum at more than 1,000 times US standards for drinking water, while aluminium, manganese and iron were significantly higher than recommended levels.

"The fact is the Citarum is still like that, and several media have been saying it's the dirtiest river in the world," Haeru said.

The latest cleanup effort began earlier this month and involves police, military, government departments, organisations and the public in the 25 districts the river passes through.