JAKARTA (AFP) - A controversial former military chief accused of atrocities during Indonesia's brutal occupation of East Timor was appointed the country's top security minister on Wednesday (July 27), and activists have called it a step backwards for human rights.

Mr Wiranto, named to the powerful post in a Cabinet reshuffle, is among senior officers indicted by United Nations prosecutors over gross human rights abuses during the 24-year occupation of East Timor.

Around 100,000 people are estimated to have been killed, mainly by Indonesian forces and their proxies, or died of starvation and illness during the occupation, which occurred during dictator Suharto's three-decade rule.

Mr Wiranto, who like many Indonesians goes by one name, was head of the armed forces when the Indonesian army and paramilitaries went on a bloody rampage in East Timor after it voted to become independent in 1999.

He denies any wrongdoing and has never faced court over the atrocities.

He replaces Mr Luhut Pandjaitan in the key role of chief security minister, overseeing five ministries including foreign, interior and defence. Observers suggest Mr Luhut caused concern among the military elite and Islamic groups by taking unprecedented steps to probe a bloody 1960s purge of communists and their supporters. 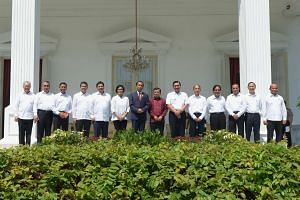 "The message might be that Jokowi (President Joko Widodo) is not going to be as progressive as before in pursuing his human rights agenda."

Mr Luhut moved to the post of coordinating minister for maritime affairs.

Despite the claims against him, Mr Wiranto has managed to maintain a prominent position in Indonesian public life. In 2014 elections he was a presidential candidate, although did not make it to the run-off, and in 2009 he was the running mate of Mr Jusuf Kalla, the current vice-president.

Mr Joko announced 13 changes to his Cabinet in the reshuffle, his second since taking power in 2014. Another key appointment is that of prominent reformist Sri Mulyani Indrawati, currently a World Bank managing director, to the post of finance minister. She previously held the post from 2005 to 2010.