JAKARTA (XINHUA) - The anti-terror squad of the Indonesian police has arrested eight militants belonging to Islamic State in Iraq and Syria (ISIS)-affiliated cells who had plotted to stage suicide bombings during the announcement of the results of the presidential polls this month, police said on Monday (May 6).

The squad captured the eight alleged terrorists between last Thursday and Sunday. Some of them were bomb-makers based in the outskirts of Jakarta, Lampung province and North Sulawesi province, national police spokesman Dedi Prasetyo said.

The eight alleged militants were members of the outlawed Jemaah Anshurat Daulah (JAD) group, which has pledged allegiance to ISIS, the spokesman said.

"The cells will take advantage... (of poll announcement) by launching suicide bombing strikes," he told a press conference at the national police headquarters.

The strikes were aimed at encouraging other militants' cells in other areas to stage similar attacks, the spokesman said.

Brigadier-General Prasetyo said the militants will use the planned huge rally during the upcoming announcement slated on May 22, aiming at creating chaos.

The spokesman added the militants planned to disguise themselves as protesters. 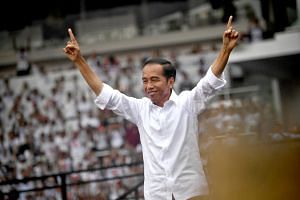 Police personnel on duty are also among the target of the militant's strikes, said Brig-Gen Prasetyo, citing that high-explosive bombs have been prepared.

In a crackdown near Jakarta on Sunday, the squad gunned down one of the eight militants, and the bomb strapped in his body went off, killing him, Brig-Gen Prasetyo said.

Members of the JAD have carried out several terrorist strikes in the country, including the multiple suicide attacks in East Java and Riau provinces in May 2018 and suicide strikes at a police station and Starbucks Cafe in the heart of Jakarta that killed eight people in January 2016, according to the police.