JAKARTA (AFP) - Indonesian police have arrested dozens of people from radical Islamic groups who were plotting attacks against the airport and other targets, the national police chief said on Monday (Feb 15).

The gun and suicide bomb attacks claimed by the Islamic State in Iraq and Syria (ISIS) and centred around a Starbucks outlet were the country's worst terror incident in seven years, ending a long lull in major terror.

Police have launched a crackdown across the country, saying they suspect a broader extremist network helped carry out the assault. 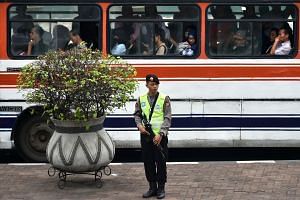 Seventeen of those arrested were directly linked to the Jakarta attacks, while 16 others were members of three other radical groups, Haiti said.

A group led by an extremist called Hendro Fernando had received 1.3 billion rupiah (S$136,000) from Jordan, Iraq and Turkey, he said, adding that it planned to launch attacks against Jakarta's main airport and the national police headquarters.

Mr Haiti said another group led by a person identified only as "Helmi" planned to use a car bomb to attack the Jakarta police complex in the city's main business district.

A third group, according to the police chief, planned stabbing attacks on traffic police.

"Terrorism attacks will still happen in the future because there are other groups who are linked to Bahrun Naim in Syria," he said.

Bahrun Naim is one of three high-profile Indonesians fighting for ISIS. Police say he played a central role in motivating groups in Indonesia to launch attacks in the country.

"(Naim) explained and gave motivation about launching a holy war and explained how to make bombs and said that he would send money to anyone who is ready to engage in terrorist acts," Mr Haiti said.

Indonesia, the world's most populous Muslim-majority country, suffered several major bomb attacks by Islamic radicals between 2000 and 2009, including the 2002 Bali bombings that killed 202 people.

A subsequent crackdown weakened the most dangerous extremist networks.

There are currently 392 Indonesians fighting for ISIS in Syria and over 50 more are thought to be preparing to leave for the country, police said.