JAKARTA (THE JAKARTA POST/ASIA NEWS NETWORK) - Neighbours Indonesia and Malaysia have reached a deal on a joint venture to produce the first fully local-made Asean vehicle for domestic use.

Government representatives of the two countries signed a memorandum of understanding (MOU) in Jakarta on Friday to begin cooperation on the improvement of the automotive manufacturing workforce and supply chains with the aim of learning to fully produce components in the region and establish a new brand.

Malaysian Minister of International Trade and Industry Darrell Leiking, who signed the MOU on his country's behalf, lauded the move as a follow-up to the visit by Malaysian Prime Minister Mahathir Mohamad to President Joko "Jokowi" Widodo in June.

"This is a testimony where a strong bilateral economic relationship between Indonesia and Malaysia has come to reality," he said during the signing event. "This shows that Malaysia and Indonesia should not be separated and should stay together in the economic and social development of the Asean region."

Leiking pointed out that Indonesia was Malaysia's seventh biggest trading partner, with interdependency between the two countries' automotive industries.

According to Trade Ministry data, Indonesia booked a US$139 million (S$190 million) surplus in trade with Malaysia from January to May this year amid total trade of US$7.65 billion. The surplus marks a turnaround from a US$160 million deficit recorded over the same period last year.

MAI CEO Mohamad Madani Sahari said that, Indonesia and Malaysia, if joining forces, were already capable of creating vehicles with 90 per cent of the components made locally.

The two countries had also looked into the possibility of manufacturing cars that run on biodiesel, considering that Indonesia and Malaysia were the world's largest palm oil producers.

During his visit, Mahathir said Indonesia and Malaysia needed to fight together against the European Union's plan to restrict imports of crude palm oil (CPO) and its derivative products.

"The IOI and MAI have agreed to implement further collaboration specifically for this research," Mohamad said following the event. "We will have more cooperation on research to advance our (capabilities) in creating electrical, hybrid vehicles."

However, he declined to set a target as to when any prototype vehicle made by the two countries might be completed, saying the entire process would be up to the corporations carrying out the MOU.

The Indonesian Industry Ministry's director general of resilience and development of international industrial access, I Gusti Putu Suryawirawan, said the number of Indonesian and Malaysian automotive component makers totalled almost 2,000 companies, with many of them falling in the small and medium enterprise category.

"The other important outcome of this (MOU) is human resource development - we will be able to upskill our automotive workers and exchange knowledge or information at the same time," Putu said.

He pointed out that such cooperation was living the spirit of the Asean Economic Community (AEC), which was established by Asean in 2015. The community entails a mutual recognition agreement (MRA) that guarantees engineers and professionals of seven other fields privileged access to the labor market of other Asean countries. 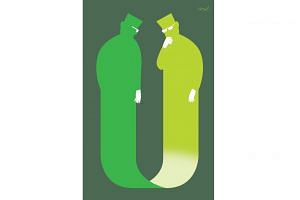 The MOU, he added, sought to create multiple types of vehicles, be it passenger cars, commercial or special-purpose vehicles.

"There are more than 640 million inhabitants in Asean. They will grow, and so will their purchasing power for vehicles," said Putu. "Therefore, we will do our best to supply that market."

IOI chairman Made Dana M. Tangkas said that, over the past years, high demand in Malaysia's automotive industry had prompted imports of components and spare parts from Indonesia.

Data from the Association of Indonesian Automotive Manufacturers (GIIAS) show that Indonesia had shipped almost 1.5 million individual components for passenger and commercial vehicles to Malaysia in the first half of 2018.

"This (MOU) is a warm-up toward the formation of a federation of Asean automotive institutes, which will concentrate on the benefits of Asean's own automotive industry," Made said, adding that the cooperating parties were looking forward to welcoming more Asean members, especially Thailand, which is the region's largest automotive producer.