JAKARTA (BLOOMBERG) - Indonesian authorities are conducting a review of the operations of Lion Air, the Transport Ministry said, as the search for the main wreckage and cockpit voice recorder of the crashed Boeing jet continues into a seventh day.

The "special audit" will cover the standard operating procedures of the airline, the flight crew qualifications and coordination with industry stakeholders, the ministry said in a statement.

The ministry is coordinating with institutions such as the European Union, the International Civil Aviation Organisation and the US Federal Aviation Administration and corrective steps will be taken on the basis of the review, it said.

Indonesian authorities have intensified an inspection of all aircraft in service, with President Joko Widodo asking airlines to accord the highest priority to passenger safety after Lion Air's Flight JT610, a Boeing 737 Max 8 jet, plunged into the Java Sea off Jakarta on Oct 29.

The government had already ordered a review of Lion's repair and maintenance unit and suspended several managers as it emerged the ill-fated jet had reported some technical issues a day before the crash.

The Transport Ministry is coordinating with airport authorities, navigation operators and airlines, among others, to ensure airworthiness at all airports in Indonesia is well maintained, Transport Minister Budi Karya Sumadi said.

Even after a week-long search involving dozens of ships and hundreds of specialists, the plane's main wreckage and the cockpit voice recorder that's key to unravelling the mystery are yet to be recovered. 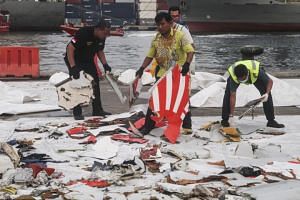 Lion Air crash: What we know so far

While the National Search and Rescue Agency  on Saturday said its divers had spotted the main body of the plane, its chief M. Syaugi said on Sunday that the images spotted were only the skin of the aircraft on the seabed.

Indonesian search crews have recovered a flight data recorder, both the engines, a part of the landing gear, body parts of victims and personal belongings since the flight carrying 189 people plummeted into the sea.

While it may take days or weeks before definitive information emerges on the crash, Lion Air has said the aircraft had experienced problems with sensors used to calculate height and speed in its previous flight.

The issue was checked by maintenance workers overnight before the plane was cleared for the ill-fated flight, the airline said. It's too early to determine what led to the disaster, the carrier's owner Rusdi Kirana has said.

The nation's domestic airline market has boomed in recent years to become the fifth-largest in the world. Local air traffic more than tripled between 2005 and 2017 to 97 million people, according to the CAPA Centre for Aviation, and is dominated by flag carrier PT Garuda Indonesia and Lion Air Group.

Carriers have struggled with safety issues, partly as a result of the pace of that expansion, as well as issues intrinsic to a region of mountainous terrain, equatorial thunderstorms and often underdeveloped aviation infrastructure.