JAKARTA (REUTERS) - Indonesia plans to launch a new strategy to fund disaster recovery, which could include selling "catastrophe bonds", a government official said on Thursday (Oct 4), as the country faced up to the devastation from a huge earthquake and tsunami.

The city of Palu and surrounding districts on the island of Sulawesi were rocked by the 7.4-magnitude earthquake last week, killing more than 1,400 people and destroying thousands of homes, as well as damaging bridges and other infrastructure.

Mr Suahasil Nazara, who heads the fiscal policy office at the Finance Ministry, said the strategy would be launched when Indonesia hosts the annual meetings of the International Monetary Fund (IMF) and the World Bank in Bali later this month.

"A disaster could come anytime, no one can predict, but whenever it occurs, we must have the capacity to address it," Mr Suahasil told reporters on the sidelines of a book launch by the IMF and Bank Indonesia.

The National Disaster Mitigation Agency estimated a series of earlier quakes that hit the resort island of Lombok in July and August had caused damages worth 12 trillion rupiah (S$1.09 billion) and killed nearly 500 people.

"The situation in Palu and Donggala makes us think harder on how to respond," he said, referring to the capital of Central Sulawesi Province and a surrounding district. 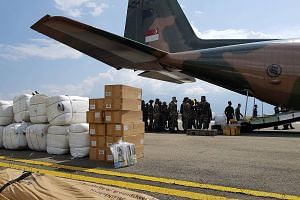 Long road to recovery, but Indonesia has friends

Mr Suahasil said that under the new strategy, starting next year, the government would begin to insure state assets against a major disaster.

The central government woulds then create a disaster risk financing instrument, which local governments can draw on if their budgets are wiped out because of a natural catastrophe, he said.

The instrument would be managed in "an insurance-type of process", Mr Suahasil said, adding that the central government may re-insure the risks with either global or local insurance players.

The government could also sell "catastrophe bonds", which Mr Suahasil described as a type of debt where the issuer pays interest, but gets the capital only in the event of a disaster.

However, the strategy may require changes in the regulatory framework, including a revision to the Treasury Law, which currently allows the government to issue bonds to finance its fiscal deficit only.

Mr Suahasil said the government plans to change some rules to allow the new strategy.