JAKARTA (AFP) - More than two tonnes of crystal methamphetamine were destroyed on Friday (May 4) as Indonesia stepped up its drugs crackdown in one of the biggest such operations of recent years.

The South-east Asian country has some of the world's toughest anti-narcotics laws, and imposes the death penalty for trafficking.

The crystal meth had been seized from foreign-registered ships in two separate operations in Indonesian waters near Singapore earlier this year.

Vice-President Jusuf Kalla inspected the drugs wearing protective gloves and a mask before tossing some bags of the crystal meth into an incinerator in the capital, Jakarta.

"We respect the police for seizing this... 2.6 tonnes (of crystal meth) have been confiscated, but there are still many out there, so the danger is still real," he said.

Indonesia - the world's most populous Muslim-majority country - has made combating narcotics a top priority and resumed the execution of traffickers in 2015 after an unofficial hiatus. 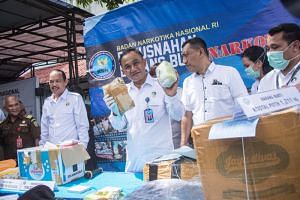 1 tonne of crystal meth seized from boat off Batam

Eighteen convicted drug smugglers - including 15 foreigners - have been sent to the firing squad under President Joko Widodo, sparking a diplomatic backlash.

Mr Joko has repeatedly defended his tough stance, claiming Indonesia faces a "drugs emergency" and must act to protect the next generation.

There were about six million drug users in Indonesia in 2016 out of a total population of 260 million, according to the national narcotics agency.