JAKARTA (THE JAKARTA POST/ASIA NEWS NETWORK) - As many as 47,000 security personnel from the Indonesian police, military and the Jakarta administration are on standby to secure important landmarks across the capital, leading up to the Constitutional Court's ruling in Central Jakarta on Thursday (June 27) on the presidential election dispute.

The losing Prabowo Subianto-Sandiaga Uno ticket had challenged the election commission's vote tally at the court on May 24, in a last-ditch effort to overturn the April 17 presidential election results which placed incumbent President Joko Widodo and running mate Ma'ruf Amin as the winner.

The Joko-Ma'ruf ticket was declared the winner with 55.5 percent of the vote compared to Prabowo-Sandiaga's 44.5 per cent.

National Police spokesman Dedi Prasetyo said on Monday (June 24) to anticipate any public disturbances, 17,000 soldiers, 28,000 policemen and 20,000 officers from the city administration would be deployed.

"Out of the 28,000 policemen, 13,000 will be assigned in the (court's) building complex. The rest will be posted at the State Palace, General Elections Commission building, Elections Supervisory Agency building and a number of embassies," he said as quoted by the Kompas.com news website.

"With such security measures, Jakartans should not be concerned and can conduct their daily activities normally on the day the decision is made," he added.

Previously scheduled for Friday (June 28), the ruling will be announced a day earlier on Thursday. A panel of nine judges had made its decision during a meeting on Monday. 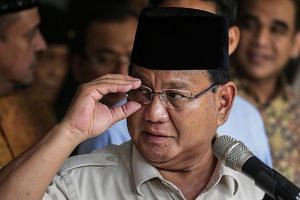 The Prabowo ticket has accused the commission of "systematically, structurally and massively" rigging the election and inflating the incumbent's tally - which stood at 85 million votes against Prabowo's 68 million votes - by around 22 million votes.

In its lawsuit, the camp also accused the rival camp, incumbent Joko "Jokowi" Widodo, of abusing his power as the president to turn the election in his favor.

The court has completed its investigation on all witness testimonies, which were divided into five hearing sessions.

Authorities said the riots were orchestrated by thugs who were paid to attack officers and stir up tensions.