BANGKOK (NYTIMES) - Myanmar made international headlines twice this week, with each instance provoking a drastically different response from the country's citizens.

First, a UN panel recommended that Myanmar's top military commanders stand trial for genocide in relation to what it has called the ethnic cleansing of the Rohingya Muslim minority.

Second, Facebook barred from its network 20 individuals and organisations linked to the military for committing or enabling "serious human rights abuses in the country." The UN report, which highlighted the massacre of at least 10,000 Rohingya Muslims over the past year, was largely ignored by the local news media and Internet users.

The Facebook ban, by contrast, catalysed a frenzied, vociferous response in Myanmar, where the social-media platform is so popular that it is synonymous with the Internet.

On Facebook - where else? - users in Myanmar debated whether they should boycott the site for denigrating their military and spiritual leaders. In addition to the bans announced Aug 27, Facebook in January froze the accounts of extremist Buddhist monks who had fanned Islamophobia in Buddhist-majority Myanmar.

"We have called Facebook to ask why they have done this," said Zaw Htay, a Myanmar government spokesman. "We worry that this action will have an impact on national reconciliation."

On Facebook, Zaw Htay has dismissed well-documented Rohingya accounts of sexual violence committed by Myanmar soldiers as "fake rape". Even as Myanmar's military leaders were ushered into a hall of infamy that includes war criminals from Rwanda and the Balkans, the nation's civilian leaders have refused to admit to a systematic military campaign to persecute the Rohingya.

Many members of the general public in Myanmar echo their leaders, convinced that the outside world, the United Nations included, has fabricated the slaughter that propelled more than 700,000 Rohingya to flee to neighboring Bangladesh since last August. 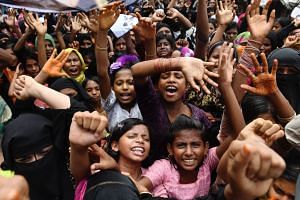 By the middle of the week, nationalists had suggested a mass migration to VKontakte, also known as VK, a social media network that is popular in Russian-speaking parts of the world.

"Another social network is coming," wrote Ye Htut, Myanmar's former information minister, on his Facebook page, referring to VK, which has been banned in several countries for its pro-Russia tilt.

On Tuesday, a VK account was set up for Myanmar's commander in chief, Senior Gen. Min Aung Hlaing, who was one of the individuals blocked by Facebook, where his page had 2.8 million followers.

As of Friday, the military chief, who recently returned from a weapons-buying visit to Russia, already had about 16,500 followers on the Russian social network.

Despite the damning UN report on genocide, Myanmar has been shielded from formal criticism from the UN Security Council by two permanent members, Russia and China.

Among those to set up new VK accounts was Ashin Wirathu, a Buddhist monk whose anti-Muslim invective has made him a prime exhibit of religious extremism in Myanmar. Ashin Wirathu was blocked by the Facebook this year.

"We have to go with Russia when the father of democracy, America, is unfair," Ashin Wirathu wrote on VK.

Facebook, long criticized by human rights groups for allowing the spread of inflammatory rhetoric that could incite violence, has acknowledged that it has been slow in curbing hate speech. From Sri Lanka to Germany, rumors shared on Facebook have helped to fuel mob anger, sometimes with bloody results.

Facebook had long operated under the assumption that just connecting people was a good unto itself, a company spokeswoman said, but the network's use as a tool to incite violence in recent years has made it clear that such connectivity can also be abused.

Facebook now has 60 Burmese speakers to trawl for unacceptable content and will employ 100 by the end of the year, she said.

Facebook has said that it cannot be in the business of policing truth. But in July, the company unveiled a new policy aimed at removing misinformation that could be used to spur violence. This policy, Facebook says, was used recently in Sri Lanka to avoid a potential crisis.

This year, deadly communal violence in Sri Lanka was catalyzed by rumors, some spread on Facebook, that Muslims were trying to make Buddhists infertile, among other provocative myths.

For some Facebook users in Myanmar, however, the platform remains an easy place to express anti-Muslim sentiment and use racist epithets, like "kalar" against the Rohingya.

"Every modernized person is moving from Facebook to VK," he wrote. "Move to VK, which is suitable for nationalists. Leave dictator Facebook."

Nay Zin Latt, who regularly posts anti-Rohingya broadsides on his Facebook page, said he had already collected 5,000 followers on his new VK account.

"This profile has been temporarily suspended due to security concerns," read a notice on his page.

The same happened to the VK account of Ashin Wirathu, the radical Buddhist monk.

"Both Facebook and VK are committing crimes against human rights and freedom of expression by shutting down Wirathu's accounts," said Yar Za, a spokesman and bodyguard for Ashin Wirathu.