BUKIT MERTAJAM (THE STAR/ASIA NEWS NETWORK) - While authorities believe that there are about 400 plastic recycling factories in Penang's Seberang Prai alone, the number of illegal operators may easily outnumber the legal ones.

"I believe that there are more unlicensed plastic recycling factories than the legal ones, and the waste is mainly brought in from other states or imported.

"Most of these factories are near Port Klang and Penang as we both have ports for the plastic to be brought in.

"These companies may be registered to operate but they may not be conducting this in designated zones or have submitted applications to the relevant local authorities to process the waste," he said.

Mr Phee said besides freezing the approved permits (AP) of unlicensed operators to import plastic waste, Penang should also have legal provisions to ensure that Tenaga Nasional and the Penang Water Supply Corporation cut their supplies to these illegal factories.

The state, said Mr Phee, was also planning to set up an area of about 40ha near the Pulau Burung landfill in Nibong Tebal to locate the plastic recyclers together with the centralised supplies. 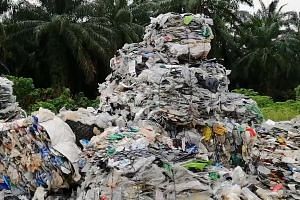 "We are still uncovering the illegal operators and operations are ongoing to halt their operations," he said.

"As of March this year, there are 404 plastic recycling factories, recovery facilities and scrapyards on the mainland.

"We've found 14 recycling factories that operate without a licence.

"We are collecting data on the operators before charging them.

"Some are still operating and they have been served with notices and compounds," he said after the full council meeting in Bandar Perda on Friday (May 17).

Malaysia minister says plastic waste is being smuggled into country

The authorities aim to shut down all illegal plastic waste recycling factories nationwide by July.

This came after the government surpassed the initial target of closing at least 100 such premises before the first quarter of the year.

A 2018 joint investigation into plastic recycling factories in Kuala Langat by Greenpeace Malaysia and the Kuala Langat Environmental Protection Association found that Malaysia took in plastic waste from at least 19 countries.

The report said that between January and July, Malaysia imported 754,000 tonnes of plastic valued at RM483 million (S$159 million).

According to Greenpeace, only 9 per cent of the plastic waste was clean plastic that could be recycled.