GEORGE TOWN (THE STAR/ASIA NEWS NETWORK) - A quarry illegally mining tens of thousands of tonnes of granite in Penang without approval is under suspicion of causing a spike in heavy metals at a nearby river.

Penang state environment committee chairman Phee Boon Poh revealed that officials found heavy metals at a nearby river that is only about 2km from the sea.

Declining to reveal the degree of the contamination for now, Mr Phee said the state had launched an investigation on the quarry, located in Teluk Bahang, after it ignored stop-work orders from the city council.

"We are still investigating the source of the heavy metals. After our papers are complete, we will take the quarry owner to court," he said.

The Star exposed the active quarry on Tuesday (Oct 1), which was supposed to have shut down in 2002.

Mr Phee said on top of checking for the heavy metals, the state was also measuring how badly the quarry was polluting the air in Teluk Bahang as part of the investigation.

He said the daily plumes of granite and laterite dust from the quarrying could pose a major threat to air quality to people living nearby.

Meanwhile, many residents living near the quarry were shocked when told the quarry was operating without a licence.

A villager, who only wanted to be known as Noh, said the quarry was active decades ago and remembered it stopped operation many years back. 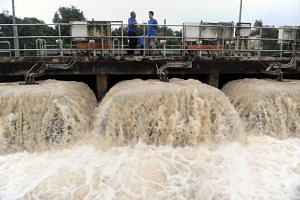 But then a few months ago, the sound of heavy machinery operating could be heard in the quarry even late into the night.

"We still hear the rumbling at night. We don't know what they are doing, but I suspect work is still being done," he said, adding that he and his neighbours had been grumbling about the dust recently.

He said sometimes, lorries and other heavy vehicles would go in and out of the site in the wee hours of the morning.

Most of the villagers approached by The Star were hesitant to speak, as they worry that something might happen to them if they talk to the press.

But all agreed that the authorities had to do something.

"During heavy rain, the water in the nearby river would turn red. If it is not raining, dust will cover everything," said a villager.

Parents of schoolchildren at SJK (C) Eok Hua, which is along the dirt road leading to the quarry, said the lorries and heavy vehicles posed a danger to their children.

"Lorries would speed by in front of the school early in the morning. It is very dangerous for our children," said a parent.

"The police are carrying out their investigations and we will follow up with whatever action that needs to be taken.

"We issued a stop-work order on Feb 14 this year. On and off, we checked on the quarry. Sometimes, they stopped work and other times, they were seen to be continuing with the work," he said.

When asked on MBPP's powers to seize the land, Datuk Yew said they were considering legal action.

"The police requested for some time to carry out their investigations, so that joint action can be carried out by both parties.

"We have been working with the police from last month to ensure more effective action can be taken.

"We are giving the police another week or two to carry out their own investigations before we move forward," he said.