JAKARTA (THE JAKARTA POST/ASIA NEWS NETWORK) - Siti Aisyah, the Indonesian woman whose murder charges were dropped in Malaysia on Monday (March 11), says she has not had a good night's sleep since her release and she feels the events that have unfurled since have been surreal.

"I've had maybe half an hour of sleep. I've found it hard to sleep, it's just... it doesn't feel real. I am still in shock," she told reporters at the Foreign Ministry after meeting President Joko Widodo on Tuesday.

Ms Siti went to the Presidential Palace with her parents, Asria and Benah, as well as her sister, and engaged in a brief talk with the president, also known as "Jokowi". She said she was happy to meet Mr Joko who "gave (her) some advice".

"I told Siti to stay at home first until she feels calmer and then she can plan her life again," Mr Joko said after the meeting.

Meeting the President was the fourth public event at which she had appeared since prosecutors at Shah Alam High Court in Malaysia dropped charges against her in the 2017 murder of Mr Kim Jong Nam, the estranged half-brother of North Korean leader Kim Jong Un, at Kuala Lumpur International Airport.

After her release on Monday, Ms Siti was flown to Jakarta immediately by private jet to reunite with her parents and other family members.

On Monday, she had three separate public appearances and photo opportunities with Indonesian officials including Foreign Minister Retno Marsudi and Law and Human Rights Minister Yasonna Laoly, where she was greeted by camera lights and showered with endless media questions, all of which, according to Ms Siti, caused her headaches.

She said she had never been in such intense public spotlight, not even during her one-and-a-half-year trial when the media took her photos from a distance.

"I can't describe the feeling, maybe I just need a rest, far from this... media (spotlight) and live with my family. I just want peace," she said.

Ms Siti and 30-year-old Doan Thi Huong from Vietnam were accused of smearing a banned toxic nerve agent on Mr Kim at the Malaysian airport in February 2017, in a trial that evoked a Cold War-style assassination and raised eyebrows around the world.

Ms Siti and Ms Huong were charged with conspiracy and murder, which according to the Malaysian penal code is punishable by death.

During the court proceedings, she was held in solitary confinement, Ms Siti said.

Now 27 years old, she said she had celebrated her birthday twice in prison alone.

And only with the support of her family, as well as officials at the Indonesian Embassy and the Foreign Ministry's citizen protection directorate who visited her every few weeks, Ms Siti kept her faith. 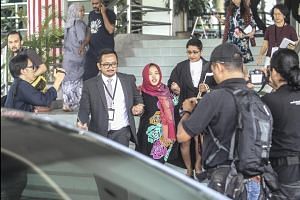 "I believed I could be free, but not this soon," she said.

"I miss my hometown and its surroundings, my parents and my son," she said, adding that she had not met her nine-year-old son in the past two years.

She tried to contact her son on Monday evening after her release, but he was not available because his grandparents had taken him for a walk.

During the trial process she said she never contacted her son because she wanted to distance him from her case.

"Maybe I will explain to him when he is old enough to understand," she said.

Ms Siti's surprise release on Monday came during a trial session when the presiding judge agreed to a discharge without an acquittal. This means, however, she has not been cleared of the charge and could still be arrested again.

Nonetheless, Mr Joko said: "We must be grateful that Siti Aisyah has been freed from a possible serious sentence and she is now together again with her family".

According to him, her release was the fruit of long efforts by the government, including the appointing of lawyers to assist Ms Siti, ever since she was detained in 2017.