PEKAN, Pahang - Hundreds of Felda settlers and their families turned up at the closely-watched visit by former premier Tun Mahathir Mohamad to Pekan on Wednesday (Feb 28) night, the home constituency of Malaysia's Prime Minister Najib Razak.

The usually empty stretch of road on the corner of Felda Chini 2 - a remote village road surrounded by tall palm trees typical of a Felda land settlement scheme - filled up almost instantly as Dr Mahathir arrived, accompanied by flashes of cameras from pressmen and settlers alike.

Said son of a Felda settler Abdul Rahim, he is not a supporter of any political group but was keen to hear what Dr Mahathir had to say. "I want to hear from him straight. I believe the people here will make the best decision," he told The Straits Times.

Dr Mahathir's visit is a bold challenge to Datuk Seri Najib's grip on his home state Pahang ahead of the upcoming national polls. It was also seen as a tit-for-tat move after the Premier just two weeks ago visited Langkawi and made infrastructure investment promises totalling RM1.3 billion (S$438 million).

Dr Mahathir is widely expected to contest as an election candidate in Langkawi, Malaysia's No. 1 holiday island which is also a parliamentary ward.

In previous elections, opposition politicians have largely been blocked by Umno supporters from campaigning in Felda plantations.

Or, the opposition had bypassed these rural estates as they are strongholds of Umno, the lead party of the ruling Barisan Nasional (BN) coalition.

The Felda lands strongly back Umno and BN because the government help these farmers and their families with the harvesting of their mostly palm oil plantations, give out easy credit for replanting, offer cheap fertilisers, aid their home building and fund their children's education.

But recent huge scandals at Felda, the Federal Land Development Authority, and its subsidiaries have given the Pakatan Harapan (PH) opposition pact the hope that they could chip away at BN's traditional Malay vote bank.

The Felda votebank, some 1.2 million people comprising the 112,000 original land settlers along with their second and third generation families, form the majority voters in 54 out of 222 federal parliamentary seats. These form almost a quarter of all parliamentary wards. 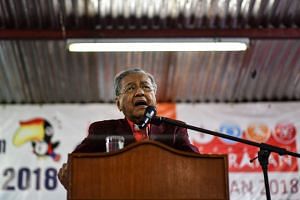 Dr Mahathir's evening venture into Umno's hardcore centre was thus closely monitored, especially as there were threats of violence. Pekan Umno division committee member Abdul Rahim Yahya had earlier warned that "there are going to be problems, there will be fights".

The ceramah (political rally) was attended by some 600 settlers and their families which started at 9pm and ended peacefully two hours later.

In his speech, Dr Mahathir, 92, admitted that he helped to make Mr Najib the prime minister but said he soon realised that the younger leader was unlike his late father, Tun Razak Hussein, who was Malaysia's second prime minister between 1970 and 1976.

Tun Razak was responsible in bringing back Dr Mahathir into Umno in 1972 after his sacking two years earlier for writing a controversial book, as well as mentoring the latter.

"I admit that I made Najib a PM - I put in effort (to groom him) because of Razak... I thought Najib would have similar qualities.

"When he became PM, he told me 'cash is king'. He thinks if he gives money to people, they would support him.

"That is Najib's way, unlike his father who worked hard till his early demise," he said.

Dr Mahathir acknowledged to the crowd their important role in the coming election, saying: "Felda is a stronghold. It is seen as vote deposit for Umno. Even though Felda has supported Umno before, but if they know what has happened, they would not be strong supporters," he said.

The attendees themselves gave mixed views.

"I love Tun Mahathir, I think he's a better leader than Datuk Seri Najib so he has my support. We know what he did and what happened under his administration," said second generation settler, Razali Ishak, 32.

Another second generation settler Ahmad Sabri, 55, believes that PH should get support to win against BN. "I was with Islamist party PAS before but now, I'm with Amanah," he said, referring to one of the four parties that make up PH.

Although there is possibility of a sway vote in Felda settlements, 64-year-old Mazuin Ahmad said she feels safer with BN.

"I respect him (Dr Mahathir), but BN will still be getting my vote because I feel that Felda is already in safe hands. Sure, there is always room for improvement but I'm confident that BN will do whatever it takes the help us," she said.

Although the Orang Asli community has been voting BN almost exclusively in the past, one of them, Hassan Ismail said the younger generation is now attempting to reverse the trend.

Mr Hassan, who is from the Jakun tribe, one of the nearly 20 Orang Asli tribes, said social media has opened the eyes of the village's younger generation. Many villagers oppose the mining and timber activities on their traditional hunting ground.

"Our main problems are bauxite, iron ore mining, and logging. These issues need to be addressed as it has been going on for years but our voices are always silenced, this is the reason why our support for BN is depleting.

"Unlike our parents, we are more open to change," said the 33-year-old man, who is also active in protecting the interests of his community.

Muhammad Kassim, 47, said the constant lack of action by state government has also resulted in him weighing his options.

"When we tried to stop them, they would namedrop a prominent figure's name. They also like to rake up the past and remind us of all the help they gave," he said.

"Every time I address our issues to our elected representative, he would accuse me of being an opposition supporter. Now I really am one," he said.