SINGAPORE (AFP) - The US destroyer John S. McCain collided with a tanker early Monday (Aug 21) as the warship prepared to make a routine port call in Singapore, leaving a gaping hole in its hull and 10 sailors missing.

It was the second recent accident involving an American warship after a collision off Japan in June, raising questions about the US Pacific fleet and whether it is taking on too much as it tackles multiple challenges.

Here are some questions and answers about collision avoidance procedures and what may have caused the latest accident:

What is the procedure for ships passing?

Commercial vessels use standard marine radar and must also have an Automatic Identification System (AIS), which connects to satellites for vessel tracking and displays the location of other ships.

However navy vessels often fail to turn on these AIS systems, which can create problems for commercial shipping when their military counterparts use busy waterways, according to Claudia Norrgren, an associate director of VesselsValue which provides data about shipping.

Analysts say an investigation must be carried out before firm conclusions can be drawn but some suggested that the US Navy ship may not have stuck to the rules for ships in the Strait of Singapore. 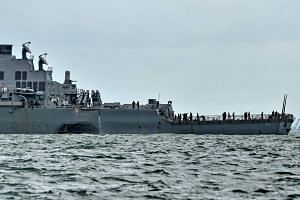 Ridzwan Rahmat, a naval expert from Jane's by IHS Markit, said the accident happened on the eastern approach to the busy strait, in an area governed by a system that separates shipping into two lanes.

Initial indications suggest the tanker, the Alnic MC, was following the rules but the USS John S. McCain may not have been in a proper position as it entered the waterway, he said.

He said it might be a sign of crew fatigue among the US Navy in the Pacific and there could be "a rethink on the kind of operations that the US Navy will be conducting moving forward, especially the freedom of navigation operations in the South China Sea".

The McCain earlier this month had carried out such a operation, which is designed to assert international navigational rights in the face of Chinese claims to most of the Sea.

Aren't there any safeguards?

There are well-established rules for vessels navigating waterways around Singapore, such as a mandatory reporting system for vessels over a certain size, said Jayendu Krishna, director of Drewry Maritime Advisors.

All ships are equipped with navigational safety equipment, and naval ships are likely to have even better and more high-tech systems, he added.

How often does this kind of thing happen?

The growth of maritime traffic in the busy trade routes around Singapore, particularly the Strait of Malacca and adjacent Strait of Singapore, has increased the risk of accidents and minor collisions are frequent, analysts say.

There are currently 268 cargo vessels in the Singapore Strait of the same type and size of the Alnic MC, said Norrgren of VesselsValue.

But such a major collision is unusual, she added.

US divers join search for missing sailors on warship, will check damaged parts of vessel