KUALA LUMPUR (THE STAR/ASIA NEWS NETWORK) - The militant housewife, whose plan to run over voters on polling day was thwarted by police, volunteered to carry out the attack for terror group Islamic State in Iraq and Syria (ISIS) and flee to Syria after that.

The 51-year-old woman is also believed to have suggested to the terrorist organisation that ramming into voters would show that ISIS is against any form of "un-Islamic democracy".

"She was in discussion with senior ISIS leaders and brought up the idea with them a few weeks before the May 9 general election," an intelligence source told The Star.

The woman, who began joining ISIS-affiliated chat groups in 2014, planned to head to Syria if her attack was successful.

Sources said the woman, who has two sons, turned to extremism after her husband suffered a stroke three years ago.

"The authorities believe she fully immersed herself into ISIS teachings after her husband's plight.

"From then on, she was quite vocal in calling for more attacks on home soil as well as urging other members to head to Syria to join the terror group's leadership there," said another source. 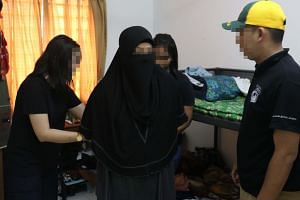 Police said on Friday (June 1) that the housewife, along with a teenager and a restaurant owner, were among 15 picked up by the police for planning ISIS attacks.

The woman's plan was to plough into voters at a polling station near her house in Puchong with her car filled with gas canisters and explosives while the 17-year-old secondary school student tested Molotov cocktails near his house.

The 41-year-old Bangladeshi restaurant owner, whose outlet is in Bukit Bintang here, was found to be a gun runner for terrorist groups.

Sources said the authorities were still investigating how long the restauranteur had been running his "side" business.

Inspector-General of Police Tan Sri Mohamad Fuzi Harun said the other 12 suspects - four Malaysians, two Filipinos with permanent resident status, a couple from a North African country and four other Filipinos - were detained in Kuala Lumpur, Selangor, Johor, Kelantan and Sabah between March 27 and April 26.

The housewife, he said, was detained on the morning of polling day before she could carry out her plan.

The teenager, who was arrested on April 20, wanted to attack entertainment outlets and non-Muslim houses of worship in the city with Molotov cocktails.

He had also uploaded a video stating his intention, which The Star highlighted in April.

The swoop was conducted by the Bukit Aman Special Branch Counter-Terrorism Division.

With the latest arrests, a total of 404 militants have been detained since 2013.