JAKARTA - The number of hotspots in Indonesia's Riau province has declined, although poor visibility has been reported in some areas, particularly in the east, because of forest fires.

The number of hotspots came down from 54 last Friday (Feb 22) to 23 on Tuesday (Feb 26), said Mr Sukisno, the head of the meteorology, climatology and geophysics agency (BMKG) at Pekanbaru, in Riau.

But the number has been fluctuating, with 44 recorded last Saturday and 47 on Sunday. On Monday, it went down to 32.

The Indonesian military has deployed an aircraft to the province and Mr Sukisno, who goes by one name, said cloud-seeding operations to induce rain should begin on Wednesday.

Visibility in Riau's Rupat island, in the Malacca Strait, was as low as 100m, Antara reported, citing the local authority. Rupat island, off the city of Dumai, has not received any rainfall for about a month.

"Some areas in the eastern part of Riau have not seen rain since mid-January. During dry season like now, we do experience rainfall, but within the light-to-moderate range," Mr Sukisno told The Straits Times. "Eastern parts of Riau, a coastal area, generally sees lower rainfall than the province's inland areas in the west." 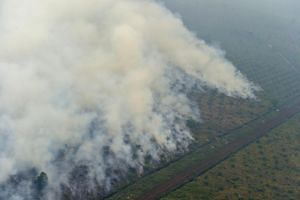 There are currently no hotspots in the western part of Riau.

"Wind direction trends during the February-March period are easterly and north-easterly (blowing from east towards west and from north-east towards south-west), or away from Singapore," Mr Sukisno added.

Riau has two dry seasons a year, February-March and June-August, and the wind direction in the latter season would be towards the north-east, or in the direction of Singapore and Peninsular Malaysia, Mr Sukisno said.

Most other parts of Indonesia experience the dry season only once a year. It is between April and September on the most populous island of Java, for example, and the rest of the year is considered the rainy season.

Forest fires were among the issues that cropped up during the recent presidential debate on Feb 17, with the incumbent, Joko Widodo, touting his achievement in curbing the fires.

"During Jokowi's tenure, forest fires have been handled quickly and the problem did not persist," senior politician Lukman Edy, representing Mr Joko's campaign team, told the Jakarta-based Elshinta radio a day after the Feb 17 debate, the second of five scheduled to take place between the two main candidates before the poll.

Mr Lukman said that there had been only one major fire - in 2015 - under Mr Joko, while previously, such incidents were annual occurrences.

"We almost never have forest fires any more. Lately, there were hot spots emerging, but firefighting teams promptly handled them," Mr Lukman said. "Forest fires are unavoidable, but the government now is there to deal with them, so the problem does not drag on."

There has hardly been any response from the Prabowo camp to the President's claims.