JAKARTA - (THE JAKARTA POST/ASIA NEWS NETWORK) - The Environment and Forestry Ministry has warned of a potential increase in hot spots in several regions, including West Kalimantan, where slash-and-burn practices remain "a local tradition".

The warning came after hot spots were detected in West Kalimantan this month. August is when the dry season is expected to hit its peak.

The ministry's Manggala Agni Fire Brigade has been preparing for a potential increase in forest fires, with teams stationed in disaster-prone areas across the country.

"August is the month when Manggala Agni and members of the alert team go on patrol to vulnerable areas," the ministry's director of forest fire control, Raffles B. Panjaitan, said on Friday (Aug 10) in a statement released on its official website.

As the land-clearing period has just started, the West Kalimantan Disaster Mitigation Agency (BPBD) reported that, on Wednesday, 466 hot spots were detected in 11 regencies.

Sanggau is the regency with the most hot spots with 173, followed by Kapuas Hulu with 112, Landak with 71 and Sintang with 62.

BPBD head TTA Nyarong said the increase in the number of hot spots was a result of slash-and-burn practices carried out by local farmers.

The agency also found that the hot spots appeared in areas with large populations of traditional farmers.

"These hot spots appeared on farmland that contain minerals. The hot spots are not spreading as fast as they would if they were on peatland," he said.

Should a forest fire occur on peatland, the BPBD would go the extra mile in mitigating it by using water bombers, he said.

The agency said that the 466 hot spots were no longer detected later on Wednesday after rain battered the area.

However, according to the ministry's forest fire monitoring system, SiPongi, 78 hot spots were detected across the province as of Friday.

The dry season is also affecting other parts of the country. Local authorities in Aceh detected a new hot spot in Blangkejeren, Gayo Lues regency, on Friday. 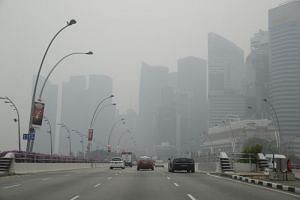 The local police are investigating the fires to determine how they started. They have interrogated three witnesses thus far.

The first fire occurred last month, burning 20-hectare of pine forest within the Batu Koda conservation forest. Weeks later, dozens of ha of land were burned in the Sipiso Piso protected forest, not far from the location of the Batu Koda fire.

Similar to how the fires started in West Kalimantan, the fires in Karo were allegedly started by local farmers who burned nearby forest to clear land.

Firefighters in Aceh and North Sumatra have been facing geographical problems, with steep and hilly terrain making it difficult for them to reach and put out the fires.

The central government, however, is determined to prevent forest fires from spreading on the island of Sumatra, as the Asian Games are being held in Palembang, the capital city of South Sumatra.