KUALA LUMPUR - Climatologists and officials in Malaysia have warned that the current heatwave may be as bad as that experienced in 1997-8, as latest conditions suggest that sweltering weather will persist until June instead of April.

"The El Nino this year is looking to be almost equal in strength to the one in 1997-98. This phase of the El Nino is a continuation from last year's, when we were affected by a thick blanket of haze," Universiti Kebangsaan Malaysia's climatology and physical oceanography expert, Professor Fredolin Tangang, was quoted by NST as saying.

"Researchers concluded this El Nino poses almost the same threats as the one we faced almost two decades ago. It is worrying," Dr Tangang told the daily on Saturday.

He said the drought would likely continue affecting the whole region, with Sabah and northern Sarawak set to be the hardest hit in the next two months.

In Sabah, Science, Technology and Innovation Minister Wilfred Madius Tangau said the El Nino phenomenon would likely last until June, instead of next month as projected earlier, although the extreme temperatures would slowly dip and more rainfall would be recorded in May.

The authorities, he said, had no choice but to plan precautionary measures to deal with the situation. 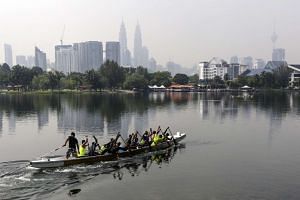 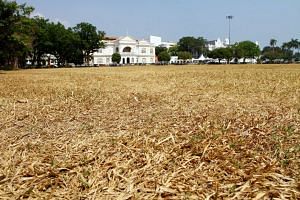 Water quality specialist Zaki Zainudin said the prolonged El Nino would result in an increase in overall temperature, which would be compounded by lower rainfall in many parts of the country. This would lower the level of water in rivers, lakes and catchment areas.

"Reduced flow of water also means a potential increase in pollutants in our streams and rivers.

"A lot of waste is dislodged into rivers, so the reduced volume of water at these sources will not help with dilution. As a result, pollutants, such as ammonia, organics and maybe even solids, will be a real threat.

"The aquatic ecosystems will also be under a lot of stress (because of the high ammonia and low dissolved oxygen levels). If it prolongs, it will result in fishkill (in which massive numbers will die)," he said.

Dr Zaki told the NST that rivers, from which low levels of water were still being extracted for supply, treatment and distribution to homes, might contain high volumes of pollutants and may not be fit for human consumption.

"This has happened before. The rise in ammonia (above 1.5 mg/L) in Sungai Langat caused two plants to shut down in 2014. Conventional treatment systems are incapable of treating ammonia. Hence, there may be risks of sporadic disruptions now and again."

Zaki said the authorities should prepare contingencies when demand for water exceeded supply.

"For example, plans for interdistrict or interstate water transfer could start being drafted and alternative water sources, such as lakes, should also be considered.

"There should also be increased efforts in pollution prevention."

He said the Department of Environment (DOE) had also been monitoring the pollution index and haze, while several other enforcement agencies would work together to curb open burning.

Those who violate the regulations would face legal action, including being dragged to court.