KUALA LUMPUR (AFP) - Honda announced on Monday (June 27) that an airbag made by Japan's Takata exploded after a minor crash in Malaysia where the driver was killed after suffering chest injuries.

There have been 13 deaths worldwide linked to faulty Takata airbags in Honda vehicles but the carmaker said "no official cause of death has been yet determined" in the latest incident.

"Honda has confirmed that the Takata single stage driver's airbag inflator ruptured in a crash," it said in a statement.

The company added an inspection with Malaysian police showed that the driver's airbag inflator ruptured in the incident involving a 2005 Honda City vehicle on Sunday. 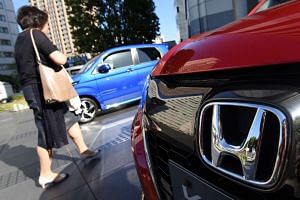 Earlier, the police said they were investigating the death of the driver.

"I confirm the woman died in the accident. We are looking at all possibilities as to the cause of her death," Mr Mohamad Zani Che Din, police chief of Petaling Jaya district, told AFP Monday.

The Malay Mail Online said the mother of two was killed when the airbag in her Honda City exploded after the accident outside the capital Kuala Lumpur.

Honda said since 2015, three mailed recall notices were sent to the owner of the vehicle but the repair was never completed.

"When I arrived at the scene I noticed there were injuries and blood on her chest. The airbag had ruptured and she was gasping for breath," he told AFP.

Tokyo-based auto parts giant Takata is struggling to deal with a defect that can send metal and plastic shrapnel from the inflator canister hurtling toward drivers and passengers when an airbag is deployed.

The latest recall in Malaysia applies to models manufactured from 2003 to 2011, Honda Malaysia said in a statement.

It includes the City, Accord, CR-V, Jazz and Civic models.

Previous deaths in Malaysia were reported in April in Sabah state and in Kedah state in May. They involved Honda City cars.

In 2014 a pregnant Malaysian died when a Takata airbag malfunctioned.