JAKARTA (THE JAKARTA POST/ASIA NEWS NETWORK) - Jamaah Ansharut Daulah (JAD), an Indonesian home-grown terror group affiliated with the Islamic State in Iraq and Syria (ISIS), remains a threat in the country despite recent crackdowns, the latest report by Jakarta-based Institute for Policy Analysis of Conflict (Ipac) has said.

ISIS is also known as Islamic State (IS).

The report, issued last Thursday (Oct 18), said the terror group would continue to launch attacks even though law enforcers have been searching for its members across the country following deadly suicide bombings in Surabaya, East Java, in May.

"The defeats of the IS in the Middle East have not weakened the determination of IS supporters to wage war at home since they can no longer get to Syria," Ipac director Sidney Jones said.

Future attacks, the Ipac said, might occur after "a period of dormancy" in which surveillance eases and complacency returns.

The Ipac predicted such attacks might occur outside East Java, especially in areas around the West Java-Central Java border, such as West Java's Cirebon and Indramayu, as well as Central Java's Tegal, which was described by the researchers as regions where a "critical mass of supporters was still active", showing a high degree of militancy.

The areas, the report said, have been producing terrorists since the deadly Thamrin attack in Jakarta in January 2016. 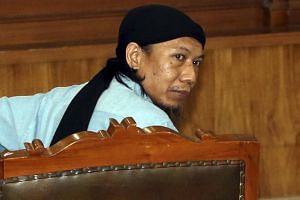 Poso in Central Sulawesi also came under the spotlight in the Ipac report, especially after earthquakes and a tsunami hit the province on Sept 28, causing several prisoners to escape. While some returned, others are still at large to date.

"It is also not impossible that extremists could see the area as fertile recruiting ground, given unhappiness with the slow pace of aid deliveries and a well-entrenched extremist network in the area," the report said.

University of Indonesia (UI) terrorist expert Ridwan Habib echoed the sentiment and warned that attacks might come ahead of the 2019 general election.

In August, the South Jakarta District Court declared JAD a "forbidden organisation" and found it guilty of committing a number of terror acts.

The ruling enables the police and their counter-terrorism squad Densus 88 to use newly added provisions in the Terrorism Law to prosecute individuals who intentionally recruit for or join an organisation declared a terror group by the court.

As of Sunday (Oct 21), the police had conducted dozens of raids on suspected JAD members, including in the latest operation in North Sumatra.

The North Sumatra Police said last Friday that its personnel killed two suspected terrorists and JAD members, and seized makeshift bombs, weapons and ammunition during a raid in Tanjung Balai, a day before they allegedly plotted attacks on temples and police stations in the city.

Mr Ridwan, however, said law enforcement had yet to be effective in eradicating terror groups.

"The arrest in Tanjung Balai indicates there is coordination between JAD members and attempts to build bombs are still ongoing. There is no deterrent effect," he said.

The Ipac also criticised the police's capability of monitoring people suspected of having a connection with terror groups, saying that "surveillance of the (Surabaya bombing) perpetrators had stopped about three months before the attacks".

According to the report, JAD Surabaya leader Dita Oepriarto had shown more signs of deliberate interaction with neighbours to present an image of "normal, pious Muslims", while at the same time Dita had allegedly been assembling at least 100 pipe bombs.

Dita, the suspected mastermind behind the suicide bombings in all three churches in Surabaya, blew himself up in one of the attacks.

"It was this willingness to engage with the community that became one factor in the police's decision to stop surveillance," the Ipac said.