JAKARTA (BLOOMBERG) - Air quality in Singapore and parts of Malaysia may worsen in the coming days, with Indonesian authorities warning of more forest fires in the region already in the grip of an unusually long dry weather spell.

More than 2,500 hotspots scattered throughout South-east Asia were detected in the past week, Indonesia's weather agency said on Sunday (Sept 8), citing satellite data.

The number of forest fires was volatile with an increasing trend, according to Mr Mulyono Prabowo, Meteorology Deputy of the Meteorology, Climatology and Geophysics Agency.

While the bulk of the hotspots were in Indonesia, there was no trans-boundary smoke detected in Singapore and peninsular Malaysia that had spread from neighboring Sumatra region, the agency said in a statement.

Singapore and Malaysia have been plagued for decades by periodic haze caused by clouds of ash from the fires in neighbouring Indonesia.

Indonesia's Environmental Affairs and Forestry Minister Siti Nurbaya Bakar said on Saturday the number of hotspots in Indonesia has seen a downward trend.

In a post on Facebook, the minister said, "The number of hotspots today (Sunday) is a third of the hotspots registered on Sep 4 and 5," she said.

"It has been ascertained that until now there has been no transboundary haze from Indonesia to neighbouring countries."

Ms Siti Nurbaya added that efforts to fight fires were ongoing at all hotspots with an "integrated firefighting" method developed following the devastating fires in 2015.

She also indicated that 99 per cent of the forest and land fires were caused by human activities. 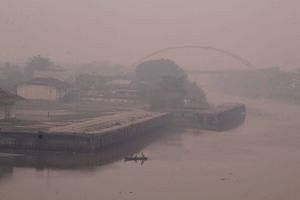 "We will not tolerate those who start these fires on purpose. We will continue to pursue the culprits and take stern action," she said.

Data from Singapore's National Environment Agency showed the air quality in the island nation, though moderate on Monday, has been worsening since last week.

Stinging smoke from illegal burning to clear land for palm oil and paper plantations engulfed Singapore, parts of Indonesia, Malaysia and Thailand for over a month in 2015.

In neighbouring Malaysia, authorities have warned air in the western coast of peninsular Malaysia and western Sarawak will remain smoky until the monsoon season arrives at the end of September or early October.

The environment ministry is looking into cloud seeding, and authorities are also sending a diplomatic note to Indonesia to demand immediate steps to fight forest fires, Malaysian newspaper The Star reported on Friday.

Indonesia has deployed thousands of military, police and disaster mitigation agency workers to extinguish forest and land fires in more than 1,600 spots.

The disaster mitigation agency is using 37 aircraft for water bombing, weather modification and artificial rain operations, it said in a statement.

The blazes are often started to clear land for plantations in the world's largest producer of the edible oil from palm trees.