KUALA LUMPUR (BLOOMBERG) - The 1MDB trial of former Malaysian leader Najib Razak has shed light on the staggering scope of the scandal, with testimony detailing alleged involvement by a Chinese state-owned entity and some of the world's richest people.

His lawyers have argued he was misled by others, including fugitive financier Jho Low.

Najib has pleaded not guilty to all 42 charges he faces for his alleged role in 1MDB, while Low has denied any wrongdoing.

- Najib's first trial may conclude as soon as November when the judge decides whether to call on the defence or move on to delivering a verdict. 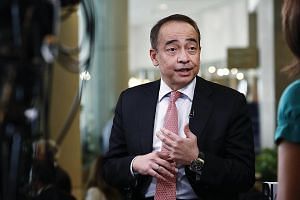 Mr Shahrol then met the billionaire in Paris to give him a letter of appointment signed by Najib, and Mr Arnault verbally agreed at the time, he said.

Low also approached Mr Michael Eisner, former chairman and CEO at The Walt Disney Co, among others, to join the board of advisers, Mr Shahrol added, without saying if Mr Eisner accepted the offer.

"From my observation, Jho Low has a direct personal connection with these people," Mr Shahrol said in court.

"Throughout the years, the method used by the perpetrators has been refined and tightened up", leaving little room for discussion, Mr Shahrol testified.

The fund raised US$3 billion in 2013 to fund its half of a US$6 billion joint venture with Aabar Investment PJS Ltd to develop TRX City Sdn, while Aabar didn't contribute its part of the fund, he said.

TRX has previously said it received none of the funds.

Mr Shahrol said Jho Low sought to rush the process through and told him that the joint venture would have a big impact on Malaysia's 2014 general election, creating the perception that the fund raising was linked to the polls.

In July 2012, 1MDB planned to sell a more than US$2.22 billion stake in a unit operating in Venezuela after the US sanctioned the South American country, Mr Shahrol said.

The stake was sold to Bridge Partners International Investment Ltd, which paid 1MDB using US$2.32 billion of promissory notes.

1MDB received none of the funds as the promissory notes were used to buy units in Bridge Global Absolute Return Fund as managed by Brazen Sky Ltd, he said.

"Jho Low has no authority but he was given a mandate by Najib to arrange the plan from behind 1MDB," Mr Shahrol said.

"I'm confident and believe that without the involvement and consent from Najib definitely none of this would have happened."

Prosecutors presented Mr Shahrol with all the documents linked to his testimony and asked if the instructions contained in them could have proceeded without Najib's signature. Each time, he answered no.

1MDB received US$907.5 million on May 22, 2012, part of proceeds from its US$1.75 billion debt offer meant to fund the purchase of Tanjong Energy Holdings Sdn, only to transfer US$576.9 million to Aabar as a "security deposit" that same day, he testified.

That year, 1MDB received US$1.64 billion on Oct 19 from proceeds of another US$1.75 billion of notes sold to finance the acquisition of a power producer from Genting Power Holdings Ltd.

The state fund transferred US$692.2 million to Genting for the purchase, and US$790.4 million to Aabar again as "security deposit", Mr Shahrol said.

He said the payments to Aabar was made in "good faith" based on documentations presented to him by former Goldman Sachs banker Tim Leissner, 1MDB's ex-general counsel Jasmine Loo and former 1MDB director Terence Geh.

It was only after an investigation into 1MDB that he found out that the payments were arranged by Jho Low to bring the funds into an account managed by him, Mr Shahrol said.