In his article, the writer says the ride-hailing and online payments company Go-Jek's expansion plans will mirror its achievements in Indonesia

SINGAPORE (THE JAKARTA POST/ASIA NEWS NETWORK) - Go-Jek's strategy for Southeast Asian expansion is designed to capitalise on lessons and skillsets gleaned on its home turf.

The Southeast Asian ride-hailing market was jolted by the recent announcement of Uber's retreat from the region. At first glance, it would appear a dramatic victory for Singapore-based rival platform Grab, which acquired Uber's Southeast Asian operations in exchange for a 27.5 per cent stake.

The merger's real winner, though, may be mutual investor SoftBank, which will be relieved from having to bankroll costly competition between the two apps. As of this writing, the completion of the deal is on hold pending review from the Singapore government's antitrust watchdog.

One person who is doubtlessly following the Uber-Grab drama with particular interest is Nadiem Makarim, CEO and co-founder of Indonesian "super-app" Go-Jek.

Coinciding as it does with the start of Go-Jek's push towards regional expansion, Uber's exit may open a path for Indonesia's first and biggest unicorn to extend its success beyond its home nation.

As of January 2018, Grab's valuation reportedly exceeded Go-Jek's by at least US$2 billion (S$ billion).

But the battle between these two companies - whose CEOs attended Harvard Business School at the same time - is likely to be fierce, as those who know Go-Jek's story will attest. 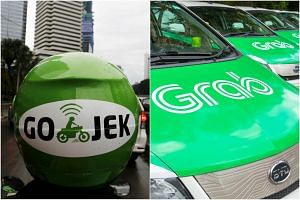 In the course of extensive field research at Go-Jek's Jakarta headquarters and preparation of an INSEAD Teaching Case, I learned how Makarim and his team built a mobile empire despite local conditions that could not be more different from those of tiny, orderly Singapore.

The initial inspiration for Go-Jek rose out of the traffic-clogged streets of Jakarta, Indonesia's capital.

Jakartans are famously thought to spend 10 years of their lives in traffic, much of it during the morning and evening rush.

Two-to three-hour commutes are common. Your best bet to avoid the gridlock is to hail an ojek (motorcycle taxi). But flagging one down was often a challenge - at least, before Go-Jek came along. Ojek drivers were haphazardly strewn about the city, waiting on street corners and in parking lots to negotiate with those needing a ride.

Go-Jek began in 2010 as a call center enabling riders to order an ojek by phone.

In 2014, inspired by the success of Uber and other ride-sharing platforms, Makarim launched Go-Jek as a smartphone app. But unlike Uber and Grab, which had both feet firmly planted in transportation at launch and added other services later, Makarim had a menu in mind from the outset.

Ride-sharing services alone, he reasoned, would not generate sufficient network effects to achieve lift-off and scale. Business would slump outside the rush hours. To keep drivers busy all day and increase demand, Go-Jek also offered Go-Send (a courier service) and Go-Food (food delivery).

By mid-2015, Go-Jek was one of Indonesia's most downloaded apps.

In its first 14 months, the app logged 100 million transactions. Additional services were introduced in swift succession, including Go-Mart (grocery delivery), Go-Clean (a housekeeping and cleaning service) and even Go-Massage (for booking spa treatments anywhere).

In short, Go-Jek had become perhaps the only app outside China to merit the "super-app" status of an Alipay or WeChat.

Recently, Go-Jek moved into the fintech space, offering an e-wallet called Go-Pay that customers could use for all Go-Jek services.

Aware that 64 per cent of Indonesians had no access to banking services, Makarim saw great potential for eventual expansion into transactions outside the app system. A series of fintech acquisitions in December 2017 brought his hopes closer to reality.

Two main points of Makarim's strategy enabled Go-Jek to grasp the opportunities of the Indonesian market - chiefly its 260 million-strong population, 55 per cent of whom are younger than 30 - without slamming into its many roadblocks.

First, Makarim realised from the start that the drivers were his lifeblood.

Deviating from the standard demand-dictates-supply business logic, he correctly predicted that a massive deployment of available drivers would release pent-up demand for Go-Jek's suite of services.

So while Uber spent millions upon millions on promotions and price cuts aimed at both drivers and customers, Go-Jek focused marketing efforts squarely on the fleet.

The company held a string of huge, street-fair-style driver recruitment events in basketball stadiums, signing on drivers by the tens of thousands.

Sharply contrasting Uber's controversial preference to regard its drivers as independent contractors, Go-Jek encouraged drivers to feel like an integral part of the organisation.

Drivers who could not afford a smartphone were given loans to buy one; assistance was granted to those who didn't have the necessary paperwork to register legally as a Go-Jek driver. Drivers flaunted their association with the app via branded attire and accessories, which quickly made the streets of Jakarta stream with Go-Jek's signature shade of green.

Second, Makarim's familiarity with the local environment helped him sidestep pitfalls early on. The pivotal decision to concentrate on ojek, for example, was doubly context-savvy: It skirted direct competition with Jakarta's existing taxi industry, while dodging the nation's transport regulations, which applied only to four-wheeled vehicles.

By the time the app introduced four-wheelers in 2016, Go-Jek had already cultivated a public profile as a boon to the local economy and a patriotic symbol of Indonesian progress.

Go-Jek's goodwill in governmental circles was tested on Dec. 18, 2015, when the news broke that the Transportation Ministry had announced a blanket ban on ride-hailing transport apps.

This also happened to be the day Makarim's first child was born. "It was both the worst day of my life, and the best," he told me.

Less than 12 hours after the ban was announced, however, Indonesian President Joko "Jokowi" Widodo overturned it, declaring, "We need to remember that ojek exists because the people need it."

Go-Jek's strategy for Southeast Asian expansion is designed to capitalise on lessons and skillsets gleaned on its home turf.

Makarim is eyeing countries such as the Philippines and Thailand, which share with Indonesia many of the logistical challenges (e.g. traffic jams) that arise when infrastructure cannot keep pace with urbanisation and economic expansion.

The planned entry to Singapore is more unique, reflecting its status as an important Southeast Asian business hub.

Yet Grab possesses a decided advantage as the earlier entrant in these markets.

The competition between Go-Jek and Grab may be won by the platform that is faster and better at leveraging local resources to solve problems that prevail regionally.

The writer is an associate professor of entrepreneurship and family enterprise at INSEAD. The Jakarta Post is a member of The Straits Times media partner Asia News Network, an alliance of 23 news media entities.