BANGKOK (BLOOMBERG) - In a year when record heat is scorching Europe and the heaviest rain in decades has inundated parts of the US Midwest, the Asia Pacific region is suffering from its own maelstrom of extreme weather.

Drought, and floods in some areas, have devastated the livelihoods of thousands of people, and damaged crops in an area that produces most of the world's palm oil, natural rubber and rice, and more than a third of its sugar.

While parts of China endured the most rain in almost 60 years, water levels on the Mekong, one of Asia's largest river systems, have fallen to among the lowest ever, and areas of southern India are battling relentless drought.

"Over the past several years, we've been seeing more dryness than not in the region," said Mr Donald Keeney, senior agricultural meteorologist at Maxar, a US-based weather consultant. "These conditions will cause a decline in production of the main crops later this year and into next," he said.

Dry conditions have wilted rice fields in Thailand and Indonesia and parched sugar cane plantations and oilseed crops in India.

In northern regions, lack of rain and drought have threatened some crops, though the impact is mitigated by irrigation. By contrast, some southern provinces had the heaviest rainfall since 1961 in the five weeks to early July, according to the meteorological administration, hampering early rice output and worsening pest problems.

China is the top producer of wheat and rice, and second-biggest for corn, according to US Department of Agriculture data.

India jostles with Brazil as the biggest producer of sugar. Output this year may drop to the lowest in three years as a prolonged drought shrivels cane in the states of Maharashtra and Karnataka, trimming the domestic surplus and potentially curbing exports.

Deficient rainfall from the annual monsoon also threatens oilseed crops, which could boost foreign purchases of edible oils, including palm oil, where the country is the largest importer. Still, Mumbai has been hit by heavy downpours, a sign of the weather's erratic nature. 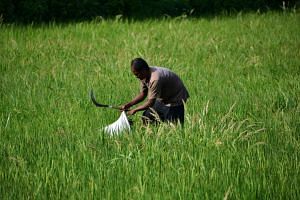 These are the world's top palm oil producers. The next three months will be crucial to determine how output will turn out next year and dryness in areas of Borneo island will be closely watched, said Mr Ling Ah Hong, director of plantation consultant Ganling Sdn Bhd, who's worked in the industry for more than four decades. Rice production is threatened by dry weather on Java island, where some areas are without rain for more than 60 days.

Thailand is the globe's top grower of rubber, and one of the largest exporters of sugar and rice. The worst drought in years in some areas is hurting crops, and caused authorities to cut estimates for cane output and rice shipments. Cloud-seeding planes have been deployed, and pumps and trucks have been used to divert water to the affected areas in the north and northeast.

A heat wave and drought have hit parts of the country, hurting rice and rubber. Still, the central highlands, where most coffee is grown, have escaped major harm so far. Vietnam is the largest producer of the robusta variety.

Much of the east coast is still gripped by a drought that began more than two years ago. The dry conditions are worst in Queensland, the biggest beef-producing state, but extend into much of New South Wales.

The situation is much better in Western Australia, where the wheat crop had good late rain and is likely to be on a par with the bumper season last year. Even so, Australia is likely to import more wheat after the coming harvest, said Mr Tobin Gorey, a strategist at Commonwealth Bank of Australia.