JAKARTA (BLOOMBERG) - When Harijanto needed more workers to make Nike and Adidas sneakers at one of its factories outside the Indonesian capital Jakarta, he couldn't make the numbers work.

Faced with one of  the world's most generous payout packages for fired workers and having to navigate a complex minimum wage system, Harijanto said he couldn't employ the extra people to expand his business.

For manufacturers like his PT Adis Dimension Footwear, which ships two-thirds of what it makes to the US and Europe, the rigid labour laws not only put a cap on output but also make it difficult to compete with peers like Vietnam in luring much needed foreign investment.

"Production has been stagnant in the past three years," Harijanto, who like many Indonesians uses one name, said by phone. "Buyers are reluctant to jack up the capacity here because the risks are high."

Harijanto and other manufacturers in South-east Asia's biggest economy may soon have something to cheer about. President Joko Widodo, fresh from winning a landslide victory in the April election, is vowing a major overhaul of labour rules as he seeks to revive factory output and boost jobs.

The timing couldn't have been better as businesses look to diversify their supply chains to skirt higher US tariffs on China, with many of them turning their sights to South-east Asia. It would also help spur an economy that's still lagging the 7 per cent growth the president promised to achieve in his first term.

Indonesia's labor laws have long been a contentious issue, frequently cited by the International Monetary Fund and investors as a brake on investment and a reason why the nation scores lower versus its peers on the World Bank's ease of doing business rankings.

For example, a worker employed in Indonesia's biggest cities, Jakarta and Surabaya, for 10 years can be eligible for about 95 weeks of severance pay, the most generous in the world after Sri Lanka, Mauritius and Sierra Leone, according to the World Bank. It's also more than twice as much as what a worker with the same tenure would get in Vietnam.

Harijanto says the labour laws have made it "impossible" for foreign businesses to invest in the country, and "the longer they operate in Indonesia, the more unable they are to pay the severance." 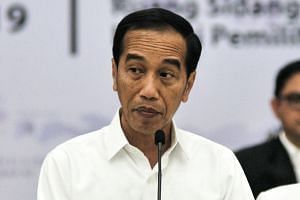 Jokowi, as President Widodo is commonly known, said in a recent interview he'd consulted with business groups and labour unions and wants changes to the labour laws, including severance pay and minimum wages. He hoped these would be completed by the end of this year. To revive manufacturing and boost exports, he's pledged to lower corporate taxes and open up more industries to foreign investors.

"At the end of the day we have to look at the future of jobs, and this is really the key for Indonesia," said Shinta Kamdani, deputy chair of the Indonesian Employers Association, known as Apindo. The severance pay rules are "not competitive, it's ridiculous," she said.

Businesses also want more certainty around the minimum wage and a less complex system. At the moment, regional governments and even city administrations get to set minimum pay, which can also vary from sector to sector, resulting in a fragmented labour market.

Sofjan Wanandi, chief adviser to Vice President Jusuf Kalla, said the government is aware it needs to make the laws around hiring and firing more flexible. But this would take time to be approved through the Parliament with Jokowi needing to secure the support of his coalition partners.

"We need more labour intensive industries coming because we have so many unskilled people," he said. "He has to work with the coalition because the coalition controls the Parliament. A lot of his policies cannot move if the Parliament don't approve them, including the budget."

With its large labour force, high levels of poverty and millions in part-time work, protecting workers' rights has been necessary. Even with a jobless rate at a 22-year low of 5 per cent, Indonesia has about 39 million people, or 30 per cent of the labour force, categorised as underemployed - working 1-34 hours a week. Another 74 million are employed in the informal sector.

Labour reforms have been promised in the past and not been delivered, but this time around Kamdani sees reason to have faith.

"With the external conditions, with the slowdown of the global economy, the trade war, we want to take up the opportunity of a relocation of investment," she said. "We need to make this work and grab the opportunity because we are competing with the rest of the world."