"It's not 1MDB funds. When we issued the cheques we were very clear it was not (funds) from 1MDB.

"I would not have issued the cheques if they came from 1MDB," he told reporters at the Parliament lobby on Monday (July 23).

It was reported that Barisan Nasional received RM300 million (S$100 million) from 1MDB for the 2013 general election and that Umno headquarters received about RM145 million of these funds from Najib's AmBank account.

Pressed further, Najib said the matter is under investigation and that the source of funds must be established clearly.

"Let it be in the hands of investigators because we do not want to preempt their findings," he said. 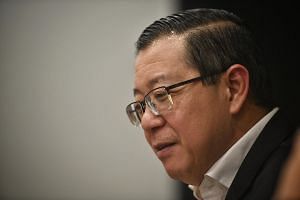 The Pekan MP was presented a three-tier vanilla cake which featured a caricature of him, as well as the words "Thank You Sir Dato' Sri Najib Razak" written on the cake.

He was also gifted a commemorative video of his tenure as prime minister and his contribution to the nation, Umno and Barisan Nasional.

"That message touched my heart. It was an acknowledgement of everything the previous government has done, especially the national transformation programme which has brought a lot of change to Malaysia especially on economic and social development.

"I hope the new government will fight for Malaysia's future and they do good by the rakyat, instead of simply blaming the previous government for everything," he said.

Najib added that Barisan had done its best for the people, and that Pakatan Harapan must now focus on fulfilling all their promises and administer the country well.

"The rakyat will claim all the sweet-sounding promises made to them, and the new government must deliver those promises," he said.