BANGKOK (REUTERS) - Thai junta chief Prayut Chan-o-cha is known for losing his temper in public, but recently he has displayed a softer side amid speculation he may run for office in the first elections since the army seized power in 2014.

The general-turned-prime minister has appeared on state television cooking a chicken curry for villagers and riding a tractor with farmers. Last month, he released one of his trademark ballads, which has been played repeatedly on the radio.

"Don't let anyone destroy things like in the past ... Hold our hands sincerely and go forward together," goes the song, which was written by the 64-year-old leader himself.

Mr Prayut, in short, has been acting a lot like a politician - even as he keeps the country waiting to hear if he will be a candidate in a long-delayed general election to restore civilian rule, now set for March 24.

The election is seen as a battle between voters loyal to ousted populist prime minister Thaksin Shinawatra and his sister Yingluck - both deposed in military coups - and establishment-minded traditionalists who accuse the Shinawatras of corruption.

Mr Prayut, however, says he needs time to think. Technically, he has until Friday (Feb 8), the deadline to register candidates. 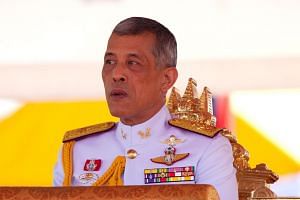 Most presume he will not be able to resist entering the race.

Under a new constitution ratified in 2016, the military has a powerful sway over who will be prime minister.

A combined majority of the 250-seat Senate, entirely appointed by the junta, and the 500-seat House of Representatives chooses the prime minister.

So a candidate who can count on the support of the Senate would only need 126 votes in the lower house to have an overall majority.

Even if he doesn't stand in the election, Mr Prayut could still return as a last-minute "outside" prime minister if parties cannot agree on any of the candidates listed before the vote.

Despite the built-in advantages, Mr Prayut's transition from coup-maker to candidate may not be easy.

Since taking power, he has often shown flares of temper. He once threatened to throw a podium during a press briefing and at another time mused he could "probably just execute" a roomful of reporters.

He drew fire from rights groups for a ban on political activity and internet censorship, and for detaining and summoning hundreds of activists and dissidents for "attitude adjustment".

Now, Mr Prayut must act less authoritarian, said political scientist Prajak Kongkirati, who lectures at Bangkok's Thammasat University "Prayut needs people to love him now because to win an election you cannot use fear," Mr Prajak said. "He knows he cannot be a dictator forever."

In Thailand's deeply divided politics, Mr Prayut appeals to the royalist, military and middle-class opponents of Thaksin, who is seen as corrupt demagogue for policies that included subsidised health care and support for rice farmers.

Both Mr Thaksin, who was ousted in a 2006 coup, and his sister, Yingluck, forced from office in 2014, live in exile. Both have been convicted of corruption, which they deny.

For many in the elite, Mr Prayut's 2014 coup was necessary - and they might vote for him to extend his tenure, said Mr Pongphisoot Busbarat at Chulalongkorn University "Prayut has been doing well for the elite, big businesses and royalist allies," Mr Pongphisoot said. "His grumpy character may appear a liability to his image for many voters, but for his supporters it is his strength."

Mr Prayut was born in 1954 to a military family in the northeastern province of Nakhon Ratchasima, and his military career was forged during a turbulent period.

He was in pre-cadet school in 1973 when student protests brought down a military regime, ushering in democratic rule.

How Prayut missed a golden opportunity: The Nation columnist

Three years later, he was at the prestigious Chulachomklao Royal Military Academy when right-wing mobs massacred dozens of left-leaning student protesters leading to another military takeover.

In the army, Mr Prayut was known for his decisiveness and devotion to the revered monarchy. This year's election comes just six weeks before the coronation of King Maha Vajiralongkorn, who assumed the throne after the death of his father, who reigned for 70 years.

There are also more eccentric moments that endear Mr Prayut, known by his nickname "Uncle Tu", to his supporters, like his ballads and when he kissed a frog in 2017.

"It's like he has two personalities," said Mr Wassana Nanuam, a veteran journalist who has followed Mr Prayut's career since 2003.

"He also knows how to use humour which people know isn't fake."

Mr Prayut, whose office did not respond to requests for an interview, spends most of his private time with his wife and twin daughters, in their 30s, at his home at a military base.

One leisure activity he has had to give up is riding his Harley Davidson motorcycle.

"Sometimes he just starts his Harley up at home because he can't go out. He hasn't been able to ride outside since he became army chief, because he would require security to follow him," said government spokesman Lieutenant General Werachon Sukhondhapatipak.

After nearly five years in power, Mr Prayut is not acting like a man ready to ride into the sunset.

"I am a soldier, so if you criticise me a lot I will get angry," Mr Prayut told reporters in November.

"But I have to adjust myself now because I have to be patient to be a politician."