JAKARTA (BLOOMBERG) - Caviar, chocolate and stretch limousines could get a whole lot more expensive in Indonesia as the government steps up efforts to curb imports and halt a sliding currency.

The authorities will publish a list of goods as early as Wednesday (Sept 5) that will carry higher import taxes. About 900 goods were reviewed, including basic items like coffee, tea, ice cream, sausages, and pasta.

"It's done," Finance Minister Sri Mulyani Indrawati said in Jakarta on Tuesday (Sept 4). A regulation aimed at curbing imports would be issued by Thursday at the latest, she said.

The government and central bank are stepping up a battle to protect the currency, which is heading toward 15,000 rupiah per dollar for the first time since the Asian financial crisis two decades ago.

Ms Sri Mulyani said on Monday the government will scrutinise foreign-exchange transactions to curb speculation, in another move to limit currency volatility along with several steps that Bank Indonesia is taking.

A current-account deficit of 3 per cent of gross domestic product and foreign ownership of about 40 per cent of government bonds have left Indonesia exposed to the selloff sweeping across emerging markets as US interest rates rise.

Bank Indonesia's four interest rate hikes since May and direct market intervention have failed to curb the slide in the currency, among the worst performers in Asia this year. 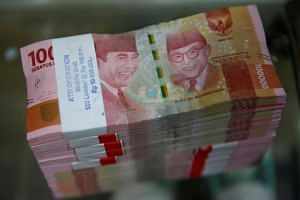 The rupiah lost as much as 0.6 per cent to 14,902 on Tuesday, the lowest since July 1998. The Jakarta Composite Index retreated 0.7 per cent, the worst performer in Asia.

The goods that had been under review already attract import taxes of between 2.5 per cent to 10 per cent, on top of import duties on some that are as high as 150 per cent. The list also included garments for fencing and wrestling, surgical gowns and motor cars including stretch limousines and armoured cargo vehicles.

Ms Sri Mulyani said on Monday that a study conducted by Indonesia's Fiscal Policy Agency, or BKF, had found the impact to inflation from the plan would be minimal.