The Supreme Court later found her guilty and sentenced her to five years in jail.

Yingluck, whose elected government was overthrown in 2014 by the army generals who still control Thailand, had denied the accusations over her handling of a rice purchase scheme that ran up losses in the billions of dollars.

"This is the first birthday I have spent overseas," Yingluck wrote on her official Facebook page, thanking Thais on her 51st birthday.

"I wish to thank the Thai people for still thinking of me."

The Shinawatra family remains influential in Thai politics, despite attempts by the military to stamp out their influence. 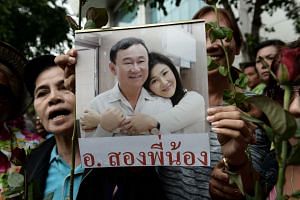 Parties aligned with Thaksin have won every election since 2001 by appealing to poorer voters.

Yingluck fled the country last August, days before the Supreme Court was to decide her case. Sources in her Puea Thai Party said she fled to London via Dubai, where her brother, billionaire former prime minister Thaksin Shinawatra, has a home.

Thaksin, in office from 2001 until he was ousted in a 2006 coup, made many enemies among the Bangkok-based elite, who accuse him of nepotism and corruption.

Yingluck was banned from politics for five years by the junta in 2015.

Since fleeing Thailand last year she has appeared alongside Thaksin, notably in China, Japan, Singapore, and the United States this year.

Thaksin also lives in self-imposed exile after fleeing a 2008 graft conviction he says was politically motivated.