Narrating and singing in Malay to the tune of Kiss And Say Goodbye by the Manhattans, the Pekan MP pokes fun at the ruling coalition using revised lyrics.

In a soft sing-song voice before the song begins, Najib says: "This is the saddest day of my life. Since May 9, 2018, I was ousted. All this while, I have been fighting for the people who I really love," referring to the date of the last general election which his Barisan Nasional (BN) pact lost after being in power for over six decades.

Accompanied by about 15 other people in the studio, Najib then launches into the song, singing and swaying.

The lyrics appear to mock the performance of the government since May, saying: "Hopes as high as mountains but crushed to become dust, I believed in you, all your promises."

The video clip of the performance has been circulating on social media, with Najib appearing to relish his strange, newfound fame as a social media phenomenon and entertainer of sorts.

Najib, who faces dozens of charges relating to criminal breach of trust, abuse of power and money laundering related to troubled state fund 1Malaysia Development Berhad (1MDB), appears to be gaining online followers as he shrugs off the allegations hanging over him and posts jibes about rival politicians. 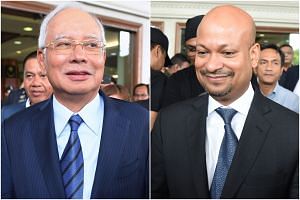 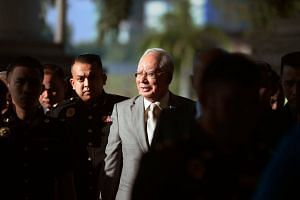 Ex-Malaysia PM Najib walks out of Al Jazeera interview, saying 'You are not being fair to me'

Last week, he caused a stir on social media when he uploaded a picture of himself posing on a Yamaha motorcycle with the phrase "Malu apa, bossku", or "What's to be ashamed about, my boss?" He recently adopted the "bossku" persona, as he campaigns for BN in the upcoming Cameron Highlands by-election.

Meanwhile, another set of allegations dogged Najib on Wednesday (Jan 23), when a cousin of murdered Mongolian woman Altantuya Shaariibuu testified in Shah Alam High Court that Ms Altantuya showed her a photo of herself, her lover Abdul Razak Baginda, and a deputy prime minister named "Razak".

Ms Burmaa Oyunchimeg was giving evidence in the family's RM100 million (S$33 million) lawsuit against the Malaysian government over their daughter's death in 2006.

Najib, who was deputy PM in 2006 and advised by Abdul Razak when he was defence minister, reiterated on Wednesday that he has never met Ms Altantuya.

"That is slander. Lies. I never met her," he said, according to news site Malaysiakini.

Ms Altantuya was killed in a forest in Shah Alam with a shot to the head before her body was blown up with explosives.

Two police commandos, Azilah Hadri and Sirul Azhar Umar, who were part of Mr Najib's security detail at the time, were convicted of her murder.

Najib has consistently denied knowing Ms Altantuya or having any part in her death.