On her Facebook page on Sunday (March 4), Tan Sri Rafidah posted photos and videos that she took of the Equanimity yacht last year in the waters off Phuket, The Star reported.

The yacht, allegedly owned by Malaysian financier Jho Low, was seized by Indonesian authorities on the island of Bali last Wednesday (Feb 28) as part of the US Department of Justice (DOJ) probe .

One photo showed crew members on board the Equanimity as it sailed while another had the yacht's tender (a smaller boat used to transport people and supplies between the yacht and shore) docked at the marina in Phuket at night with two people standing next to it.

Ms Rafidah said she managed to pinpoint the exact location of the Equanimity using the vessel's automatic identification system while on a diving trip one year ago.

"I myself piloted my instructor's boat to exactly where the Equanimity was at sea and I personally took photos and videos of the Equanimity at really very close range, including its ultra luxurious tender at the marina in Phuket later that night," she said in her post.

"We were told by some people at the marina that Equanimity was anchored offshore and the owner (or) guests usually come onshore (sic) at night in the cover of darkness," she added.

Ms Rafidah was the country's longest serving International Trade and Industry Minister, serving the post from 1987 to 2008 under the administrations of former Prime Ministers Mahathir Mohamad and Abdullah Badawi.

She said she was told that the tender was docked in Phuket that night as the owner was celebrating Valentine's Day on shore with his guests. 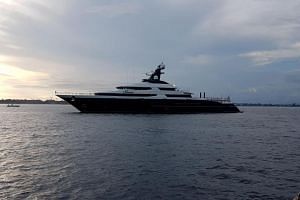 She added that a simple Internet search was able to reveal the owners of the yatch and quoted the 'SuperYatchFan' website, which named Low and his Hong-Kong based investment fund Jynwel Capital as the owner of the vessel, valued at US$250 million (S$330 million).

The Malaysiakini news website on Monday cited the Indonesia central police deputy director of economic and special crimes Daniel Silitonga as saying that Indonesia and the US were working together on the money laundering case and  they had not made any contact with Malaysian authorities on the matter.

Malaysia's Multimedia and Communication Minister Salleh Said Keruak on Thursday (March 1) said that there was no tangible proof that the Equanimity was owned by Low, whose real name is Low Taek Jho.

The Jakarta Post reported over the weekend that Indonesian police were questioning officers from the immigration office and the Benoa Harbour authority on Friday to find out if the crew of the yacht had violated immigration procedures to enter Indonesian waters.

It is suspected that the skipper had deliberately turned off the automated identification system (AIS) when it was in Indonesian waters, to avoid pursuit by the US Federal Bureau of Investigation, the tribunnews.com website reported.

1MDB is at the centre of billion-dollar money-laundering probes in at least six countries, including the US, Switzerland and Singapore.