JAKARTA (BLOOMBERG) - Fires that destroyed Indonesian rainforests pumped out more carbon dioxide than the blazes in the Amazon this year, according to the European Union's atmosphere observation programme.

The fires, which covered parts of South-east Asia with thick clouds of ash and smoke, may have released the equivalent of 709 million tonnes of carbon dioxide through Nov 15, or about the same as the annual emissions of Canada.

That's 22 per cent more than the estimated 579 megatons ejected from burning Amazon forest, according to the Copernicus Atmosphere Monitoring Service, a programme run on behalf of the European Commission.

The Indonesian fires, started mainly by farmers clearing land, burned tracts of forest spread across more than 4,000km, with the worst-affected areas on the islands of Sumatra and Borneo.

The destruction was greater than usual due to a prolonged drought from a weak El Nino, which delayed annual rains.

The haze from the fires disrupted air travel and caused respiratory illnesses for thousands of people in the region.

"What has stood out with the recent fires in Indonesia is how high the daily total fire intensity and estimated emissions is and how much higher they have been than the average of the previous 16 years," Copernicus said in an e-mailed response to Bloomberg News.

The European group said it was difficult to make direct comparisons between the disasters in Indonesia and the Amazon because of the different vegetation and fuel types.

Fires burned at a record rate in the Amazon this year. Data from Brazil's National Institute of Space Research showed an 84 per cent year-on-year increase in forest fires in 2019. 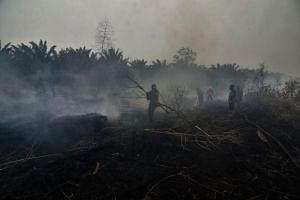 Emissions from Indonesia were the worst in the country since 1,286 megatons of carbon dioxide equivalent were released by fires in 2015, according to Copernicus.

The Indonesian government estimated roughly 2.6 million hectares of land were burned in 2015, costing the country US$16 billion (S$21.8 billion) in economic losses.

The blaze affected more than 850,000 ha this year, an area about the size of Yellowstone National Park in the United States.