KUALA LUMPUR - Malaysian Prime Minister Mahathir Mohamad said on Tuesday (Sept 4) that foreigners can buy residential units at Johor’s controversial Forest City development but they will not be issued visas to live there.

“They can buy the property, but we won’t give them visas to come and live here,” Tun Mahathir told reporters after an event at the National Art Gallery, reported the Malay Mail.

Dr Mahathir had caused much consternation and confusion last week after he announced that foreigners would be barred from buying properties at the US$100 billion (S$137 billion) Forest City, which is developed by Chinese company Country Garden and the Johor state.

His office later said he meant that the purchase of properties does not guarantee foreigners automatic residency in Malaysia.

Chinese buyers account for about two-thirds of Forest City units sold so far. A fifth are from Malaysia and the rest from 22 other countries.

“The Johor government believes that Malaysia has comprehensive laws that protect the rights of foreign investors and companies, including purchasing property,” Datuk Osman told a briefing.

“The Johor government believes that the federal government is able to be fair in protecting foreign companies that run operations in Malaysia,” he said. 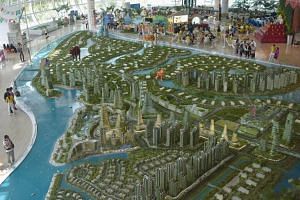 Mr Osman refuted claims that the development had not contributed to the nation’s economy, saying Country Garden Pacificview – the joint venture between the Chinese developer and Johor state – has so far paid RM309 million (S$102 million) in taxes to the federal government and RM630 million in the form of dividends and land premiums to the state government.

He said the company had also invested about RM11.5 billion in the project and awarded contracts worth RM1.4 billion to 150 local contractors.

“To date the company has employed 1,545 employees, including 1,200 locals, and all of them have paid a total of RM51 million in income tax... Country Garden is also actively recruiting fresh graduates and will continue to do so in the future,” he said.

Dr Mahathir capitalised on popular disquiet about Chinese investment pouring into Malaysia during his campaign ahead of Pakatan Harapan’s stunning election win on May 9. Mr Osman belongs to the PH coalition that brought Dr Mahathir to power.

Since becoming prime minister, Dr Mahathir has put the brakes on a number of China-backed projects, including the US$20 billion East Coast Rail Line project and a natural gas pipeline project in Sabah.