KUALA LUMPUR -  A Danish national has become the first person to be convicted under Malaysia’s new anti-fake news law.

Salah Salem Saleh Sulaiman, 46, on Monday (April 30) pleaded guilty to maliciously publishing fake news in the form of a YouTube video on the recent shooting of Fadi al-Batsh, an alleged member of militant Palestine group Hamas in Kuala Lumpur, reported The Star.

He was sentenced to a week’s jail and fined RM10,000 (S$3,378) under the Anti-Fake News Act which came into force on April 11 and provides for stiff punishments of up to six years in prison and a maximum fine of RM500,000.

Salah will spend a month in jail because he could not pay the RM10,000 fine.

The Cyber Court, where the case was heard, played the video, in which he claimed he was with the victim when he was shot. He said in the video he had made countless calls to the police who only arrived at the scene 50 minutes later, while an ambulance came an hour later.

Malaysian police have denied Salah’s claims. National police chief  Mohamad Fuzi Harun said a day after the shooting that their records showed a distress call was received at 6.41am and a patrol car arrived at the scene eight minutes later.

Salah was accused of committing the offence between 6.50am and 9am on April 21 in Setapak, where Palestinian engineering lecturer Mr al-Batsh was shot dead by two assailants on a motorcycle.

The suspect, who is of Yemeni descent, did not know Mr al-Batsh personally, the Sun Daily reported. The daily cited sources saying Salah was jobless and had previously worked as a horse groomer in Denmark.

Salah also faced an additional charge under section 233(3) of the Communications and Multimedia Act 1998, for uploading false communication with the intent to annoy, abuse or threaten another person. 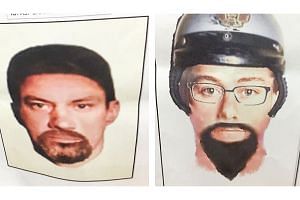 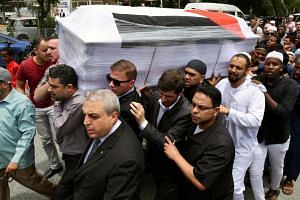 Behind a roadside hit in Malaysia, Israeli-Palestinian intrigue

The second charge carries a lighter sentence of up to one year’s prison and a maximum RM50,000 fine.

Salah, who was not represented by a lawyer, pleaded guilty to the first charge.

Deputy public prosecutor Noor Jazilah Mohd Yushaa urged the court for an appropriate punishment, saying the video had damaged the reputation of the police and the nation.

“The high fine stipulated shows it’s a serious offence, and something that needs to be addressed. A stiff penalty would be a lesson not just to the accused, but the public at large,” she said, as quoted by The Star.

In mitigation, Salah said he was a visitor, having only been in Malaysia for 10 days at the time of his offence. He said he did not know Malaysia had such a law.

However, he admitted it was a mistake and apologised for any hurt that the video may have caused.

Sessions Court Judge Zaman Mohd Noor sentenced him to a week’s jail from the date of arrest and a fine of RM10,000.
As Salah had been in remand since being arrested on April 23, the jail term was considered served.