KUALA LUMPUR (THE STAR/ASIA NEWS NETWORK) - Five people were injured, three believed to be journalists, in a mob attack near Low Yat Plaza after police dispersed protesters at the shopping mall.

An eyewitness said a group of 50 to 60 men barged into a food outlet near the shopping mall and assaulted the patrons with motorcycle helmets at around midnight.

Among those believed to have been targeted was a media photographer. A journalist who tried to protect the photographer was also beaten up. 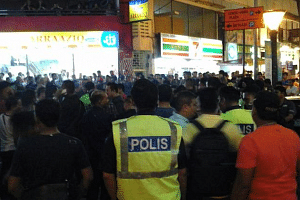 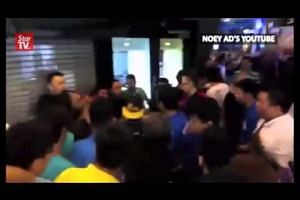 According to the reporter, a group of people shielded the two journalists from the angry mob. The two later sought shelter in a nearby hotel.

At press time, it is believed that the police have detained six individuals involved in the mob attack.

Two Federal Reserve Unit vehicles were deployed to the scene at 1am.

There were also sounds of explosions heard at the scene.

Police have cordoned off the main road entrance to the shopping complex.

Earlier on Sunday night, a group of about 100 people gathered at the Low Yat Plaza at 6.30pm, following Saturday's melee between customers and sales clerks in a smartphone shop. Police managed to contain the situation.

The group had gathered to protest what they claimed was “biased investigations” by the police.

“We want to get proper justice,” said a member of the group who identified himself as an “Ayahanda” in the national level of the group Pekida.

The police, who were already on stand-by in front of the shopping mall by then, arrested a man charging out of the complex carrying a stick.

The mall was cordoned off by police at about 9pm. The situation subsided and the crowd dispersed an hour later.

In a Twitter post on Sunday night, Inspector-General of Police  Khalid Abu Bakar said the ruckus was not racial in nature.

“Do not listen to rumours. The police will take action against those involved.

“This is nothing to do with race. Only two groups fighting,” his tweet said.

He said some suspects had been detained and efforts were being made to trace the others.

He also said the situation had been brought under control and the police had intensified patrols at the place and its surrounding areas.

On Saturday, a fight erupted between the thugs and sales assistants after a group of youths came to the shop located in Low Yat Plaza to take revenge against the retailers who allegedly caught one of them shoplifting earlier.

Some commentators on social media claimed the brawl was due to one of the youths being sold a fake phone, but this has not been verified.