This case, which will soon draw to a close, hinges on whether he knew the US$10 million (S$13.6 million) deposited in his accounts came from a former unit of 1MDB, with his lawyers arguing there was no link between the funds and decisions he took as the country's leader.

Najib's defence said prosecutors haven't shown evidence that he had a "corrupt intent" to take the RM42 million (S$13.6 million) found in his personal account, which was allegedly siphoned from SRC International, a former 1MDB unit.

The lawyers also argued there was no link between the sum and Najib's decisions related to SRC, which they said would mean the funds do not constitute a bribe.

Prosecutors argued that it is "incredible" for Najib to say he was not aware of the sum sent to his personal accounts since he made no police reports and did not sue the bank for wrongful deposit.

That Najib later issued cheques from those accounts showed he knew the money was there, prosecutors said, adding that "such an assumption can only be made by the accused if he knew that funds were being pumped into his account unless of course the accused believed that the money in his personal account grew on trees".

Both sides read out their case submissions on Tuesday (Oct 22). The judge will decide on Nov 11 whether to have Najib's lawyers summon their witnesses or strike out the charges.

This case will serve as a key test of Malaysia's ability to get to the bottom of the 1MDB scandal. Prime Minister Mahathir Mohamad returned to power last year on a pledge to recover funds lost through the troubled state fund and bring those responsible to justice. 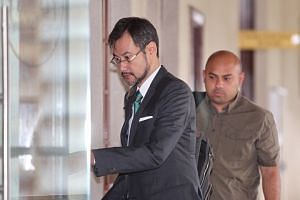 1MDB trial: Najib 'did not ask about missing funds when scandal broke in 2014'

Najib is accused of receiving the funds allegedly from SRC in exchange for approving a government guarantee on RM4 billion of loans from Kumpulan Wang Persaraan (Diperbadankan) to SRC.

The charges involve local transactions, meaning the evidence is easier to trace compared with other allegations against him that involve 1MDB's overseas deals spanning multiple jurisdictions.

The role of fugitive financier Low Taek Jho, better known as Jho Low, was discussed in the case submissions on Tuesday.

Najib's lawyers said that the funds were deposited in the former premier's accounts for Low's interests, while prosecutors argued that Low acted on behalf of Najib and gained nothing from arranging the transactions.

Low faces his own set of criminal charges in Malaysia and the United States for his alleged role in 1MDB. He has denied any wrongdoing.