Inspector-General of Police Secretariat assistant head (Corporate Communications) assistant commissioner Datin Asmawati Ahmad said that the evening fire is believed to have originated on levels 9 and 10 of Tower 2, which is where the Criminal Investigation and Narcotics departments are located.

"As with any other fire incidents, bomba (Fire and Rescue Department) will investigate the cause of the fire. Definitely, no conclusion has been reached yet," said Asmawati.

No casualties were reported, The Star reported. 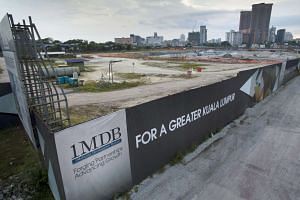 1MDB hearing will continue as scheduled even with 4 PAC members gone: Deputy chairman

Photos of the burning building went viral on social media as netizens link the fire to the state-owned investment arm 1Malaysia Development Bhd (1MDB) which is now under probe for alleged financial irregularities.

In a tweet later in the night to quell rumours, Inspector-General of Police Tan Sri Khalid Abu Bakar said: "There is no cause for alarm as only unimportant documents were lost during the fire."

"Stop the rumours," he added.

Prime Minister Datuk Seri Najib Razak has been besieged by his own subordinates and former premier Tun Dr Mahathir Mohamad to explain the 1MDB scandal and The Wall Street Journal's reports earlier this month alleging sums of money amounting to US$700 million (S$956 million) were wired to Mr Najib's personal bank accounts.

Mr Najib has denied ever using state funds for personal gain but has failed to clarify whether or not he received the money.

On Tuesday, the beleaguered leader dropped five Cabinet ministers in a reshuffle, including his deputy Tan Sri Muhyiddin Yassin who has been openly critical of Mr Najib. He also announced the replacement of Tan Sri Abdul Gani Patail, who was the Attorney-General leading a high-profile probe on 1MDB.