MANILA (AFP) - A tough-talking Philippine presidential candidate vowed to kill his children if they ever took drugs during a televised debate Sunday, as analysts warned his scandalous remarks about raping a missionary could hurt his chances.

Rodrigo Duterte has become the surprise favourite to succeed President Benigno Aquino after making a name for himself in a southern Philippine city infamous for vigilante death squads.

The 71-year-old mayor of Davao has promised to crack down hard on the Philippines' criminals, and on Sunday he vowed to be a harsh president if elected next month.

"I am really angry," he said in the final debate before the May 9 polls. "They say I am a killer. Maybe I am."

Asked what he would do if he learned one of his children was involved in drugs, Duterte replied: "I will kill him."

Analysts say his profanity-laced campaign has resonated in a chaotic, high-crime society with limited opportunities for a vast underclass working for a tiny elite. 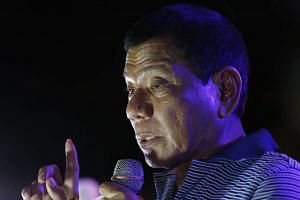 A poll by Pulse Asia, released Sunday, showed Duterte pulling ahead of his rivals.

But he caused outrage with a recent joke about the jailhouse rape of an Australian lay Christian missionary who was killed in a 1989 prison riot in Duterte's own city.

He then threatened to sever ties with allies the United States and Australia after their ambassadors criticised his remarks.

Ramon Casiple, executive director of the Institute for Political and Electoral Reform, said Duterte's joke could cost him the elections.

"The rape issue is personal. It touches on family values," Casiple said. "I talked to some of his hardcore followers, some of them have already turned away from him." 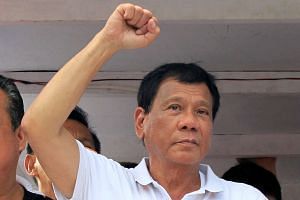 Ronald Holmes, head of research institute Pulse Asia, said the furore broke out too late to affect the survey but could affect the final vote.