In her commentary, the writer gives her take on the two candidates vying to be Parti Keadilan Rakyat's deputy president.

The two politicians are bitter and longtime rivals and the perception is that Azmin has more to lose if he fails to hold on to the post he has held since 2010.

Azmin is at the pinnacle of his political career - his Economic Affairs Minister post is seen as one of the most powerful in the Mahathir cabinet - and his clout will be affected if he loses to Rafizi.

More important, defeat will pull the brakes on his dream of becoming prime minister.

The PKR vice-president had to sit out the general election and the Kajang Move debacle still hangs over him.

As such he has little to lose and everything to gain if he makes it.

But the question on everyone's lips is - who will win? 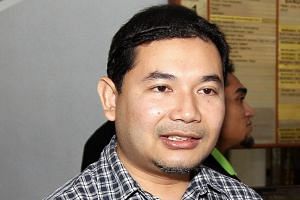 Logically, Azmin ought to have the upper hand being the incumbent and a minister.

But PKR politics is not always logical because it is quite clear by now that Rafizi has the blessings of "Istana Segambut", as the Datuk Seri Anwar Ibrahim family power base is known by.

This year is the 20th anniversary of PKR's reformasi uprising and it is symbolic that Anwar is finally ready for the party presidency.

The royal pardon has cleared him of all wrongdoing and he is set to win without a challenge.

The inside talk is that the Prime Minister designate would feel more comfortable with Rafizi as his No 2.

If that is true, it could be uphill for Azmin because the Anwar family has this amazing aura that money cannot buy.

Besides, there is already a smear campaign against Azmin starting with allegations that he has millions of ringgit stashed abroad which he has denied.

More recently, what appears to be documents of his banking transactions overseas have being going around in the WhatsApp circles, although some have slammed it as fake news.

The tactics that Pakatan Harapan politicians used against Umno leaders are now being used against one of their own.

The forces are building up against Azmin.

His detractors are also projecting him as being too close to Tun Dr Mahathir Mohamad and Tun Daim Zainuddin, two personalities that PKR members love and hate at the same time.

They have claimed that was how a number of Azmin's allies were appointed to the Cabinet.

He is seen as too strong and they want to clip his wings.

The PKR election system is arguably the most democratic among Malaysian political parties because every single member has the right to decide on the leadership.

Voting at the cabang or division level will start on Aug 24 and go on for nine weeks, with the results to be announced in November - that is, if chairs do not fly and ballots boxes are not overturned as in the last party polls.

Rafizi went one up on Azmin last night when he launched his campaign and unveiled his team which included ministers and deputy ministers.

Rafizi has many loyal allies despite his reputation of being difficult to work with.

He also redeemed himself with his data firm Invoke's activities, in the run-up to the general election.

Azmin, on the other hand, has not even confirmed that he is defending his post.

Unlike other ministers who have granted interviews to the media, he has kept a rather low profile, preferring to wait until the 100-day mark.

He had joked with some of his supporters that he may go for the presidency but that would be suicidal because he would be taking on a future Prime Minister.

But the PKR polls is a numbers game.

Whoever can bring out more members to support them will win and, according to the party's Bandar Tun Razak chief Azman Abidin, the numbers are with Azmin.

About 60 per cent of PKR's members are from Selangor, with Sabah coming second.

These big numbers ought to help Azmin although cynics say that cash is king in Sabah and only those with "resources" will do well over there.

Azman claimed Azmin also has good support in many of the Federal Territory divisions because he is seen as a tested leader who has been with PKR since the Reformasi years.

Azman who used to be the political secretary to Tan Sri Khalid Ibrahim is vying for a supreme council post.

"We keep hearing that Anwar wants to balance the power base held by Rafizi and Azmin, but Anwar has to be seen to be fair. He should not take sides, let them fight fairly," said Azman.

Not everyone in the party is comfortable about the looming contest for the No 2 post.

Even those who do not like Azmin are worried that the contest will further split the party and lead to a protracted rivalry.

They say it will weaken the party and allow Dr Mahathir and his party to assume an even more dominant hold over the coalition and government affairs.

"The build-up has been intense. What is at stake is the future of both politicians' careers. A win for Azmin will cement his position as potential PM material. A victory for Rafizi will put him in a solid position, further propel him politically especially when Anwar returns to government.

"Moreover, it is the chance for both of them to cement their spot as the rightful 'heir' to Anwar," said KRA strategy director Amir Fareed Rahim.

But, said Amir, the nature of politics is such that this will probably be the first of many future battles between these two personalities in PKR.

The PKR election was supposed to be about the crowning of Anwar as the party president but it looks like the spotlight is on who will be his deputy.

The writer comments regularly on Malaysian political affairs. The Star is a member of The Straits Times media partner Asia News Network, an alliance of 23 news media entities.