PETALING JAYA (THE STAR/ASIA NEWS NETWORK) - A reward of RM50,000 (S$16,500) has been offered for information leading to the return of missing Irish teen Nora Anne Quoirin.

She and her family, who arrived in Malaysia from London on Aug 3 for a two-week holiday, checked into eco-resort The Dusun in the dense tropical forest in Negeri Sembilan. The next day on Aug 4, at 8am, they discovered that Nora was missing from the bedroom that she shared with her two siblings.

Her family said on Monday (Aug 12) that 15-year-old Nora is the eldest child who has been vulnerable since the day she was born.

"She is so precious to us and our hearts are breaking. We are appealing to anyone who has information about Nora to help us find her," her family said.

The statement praised the police for "working extremely hard" to bring Nora Anne home, and that the reward is being offered to help their investigation.

Those with any information are urged to call the police hotline at 011-1228 5058 or email ops@lbtrust.org.

"The police teams (from England, France and Ireland) are only assisting us in the investigation into Nora Anne's disappearance and are not involved in the search-and-rescue operation," SAC Che Zakaria told a press conference at the Pantai police station in Seremban on Monday. 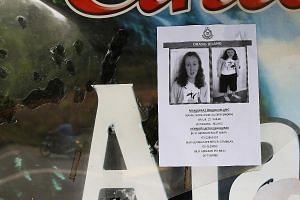 Nora was born with holoprosencephaly, a condition where the brain does not properly divide into left and right hemispheres.

Her family had said that due to Nora's illness, she is "very shy and can be quite anxious" with strangers, hence unlikely to wander away from her parents.

The teenager has learning disabilities, her family added.

Nora's father Sebastien Marie Philipe is French and her mother Maebh Jaseprine Quoirin, Irish. The teenager, who holds an Irish passport, speaks both languages, but is described as having limited verbal communication abilities.

Posters of the 1.55m-tall teenager, who has blue eyes and dark blonde wavy hair, have been distributed on social media and in nearby towns and villages.

The search-and-rescue operation is focused on Mount Berembun where 176 personnel fanned out over 12km on Monday, Bernama reported.

"We are continuing our search in the area over a 6km radius," SAC Che Zakaria said, adding that the search-and-rescue team is faced with various challenges, including the bad weather over the past three days.

The authorities have deployed more than 350 personnel from the police, fire, forestry and civil defence departments in its search operations. The police have also used thermal imaging cameras to locate the teenager in the forest.

Besides Mount Berembun, the authorities have also combed the nearby river Sungai Berembun and surrounding villages in the dense forest.